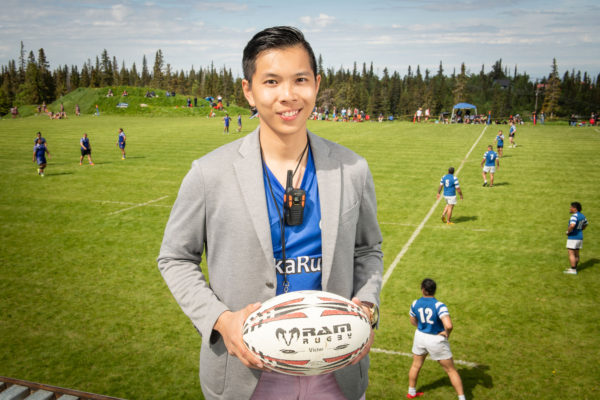 Tucked away in Hillside at the Alaska Mountain Rugby Grounds, more than 600 people gathered on June 7 and 8 for the 23rd annual Midnight Sun Sevens Rugby Festival. The event featured 30 teams from across Alaska, Hawaii, Canada, the Lower 48 and even one from South Africa, taking advantage of the Last Frontier's abundant summer sunlight to play matches until late in the evening.

You wouldn't be remiss if you've never heard about the festival during its first 22 years. New festival director and UAA business management senior Tran Dai Phu chalks that up to the event never being widely publicized prior to his involvement. Before he took over as director, Phu describes the event was mostly known to rugby players and fans, likening it to an exclusive summer retreat.

Referred to in previous years as the Midnight Sun Sevens Rugby Tournament or Championship, Phu rechristened it as a festival to attract people who wouldn't normally watch a rugby match. Come for the beer garden, food trucks and live entertainment, stay to see one the fastest-growing sports in the U.S. in action. 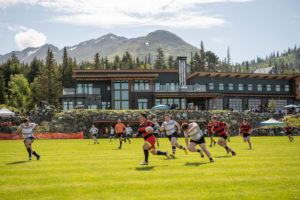 The event featured 30 teams from across Alaska, Hawaii, Canada, the Lower 48 and one from South Africa, taking advantage of the Last Frontier's abundant summer sunlight to play matches until late in the evening. (Photo by James Evans / University of Alaska Anchorage)

Just as crucial to the festival's newfound success is the wider advertising. The results speak for itself. According to Phu, the festival normally attracts about 400 attendees, about 200 fewer than this year.

Despite taking over the festival's reins this year, Phu has been with the Alaska Rugby Union - the organization that produces the event - for the last three years. In fact, joining was one of the first things Phu did when he arrived in Anchorage.

"When I first got up here and had enough fishing and hunting, I was like, 'I got to find rugby because those are the people I hang out with,'" said Phu. "I went online and saw the Alaska Rugby Union, and I found David Delozier. He's the union president and also the creator of the tournament. I don't know if the stars aligned, but when I drove up there with my gear, the USA Women's Eagles team was there warming up for a tournament in Las Vegas and they asked if I wanted to ref." 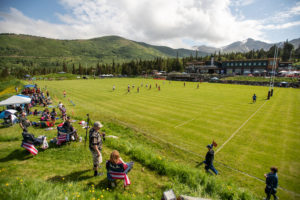 The event is organized by the Alaska Rugby Union, and takes place at the Alaska Mountain Rugby Grounds tucked away in Anchorage's Hillside neighborhood. (Photo by James Evans / University of Alaska Anchorage)

After finding his people, Phu sat on the sidelines and watched how the annual tournament was being organized. He recognized a chance to grow the local rugby community and connect it with a wider Anchorage audience. However, capitalizing on this opportunity would require even more effort from Delozier, who was mostly managing the event singlehandedly. So Phu made Delozier an offer: Let him take care of the logistics for the festival component while Delozier remains solely focused on the rugby aspect.

"Rugby is growing quickly in America, but we're competing with football and baseball, because those are pro and colleges scout them and give them full rides," said Phu. "What I realized is that it's actually up to the local unions to engage. There's such a big opportunity here in Alaska. It's a big state with a small market, but it's growing quickly."

Phu's ability to manage the event's growth is a perfect blend of his long history in rugby and his recent experience in business. Before arriving in Anchorage, Vietnam-born Phu played the sport in Singapore, starting when he was 11 years old as part of a mandatory co-curricular activity. At age 14, Phu was recruited to play for St. Andrew's Secondary School, one of the top five high school rugby programs in the country.

When he was 16, Phu injured his shoulder and tore his ACL, limiting his prospects for future professional play. In a move befitting of his nickname - Transformer - Phu became a certified rugby referee. 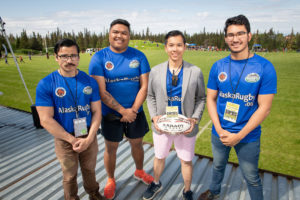 Taking advantage of his vast rugby network, Phu was able to backpack across Asia and referee games in between work and school. After earning his engineering degree from Ngee Ann Polytechnic, Phu decided he needed a change in scenery and traveled to America.

"I was in Maryland in July and it was hot and humid. It was like Singapore weather! I came to America to get cool and dry weather," joked Phu. "But my dad texted me and said, 'Hey, do you want to come up to Alaska and go fishing and hunting with me?' So I flew up and go, 'This is perfect weather!' So I'm here on a boat fishing and having the best time. I've got to stay here." 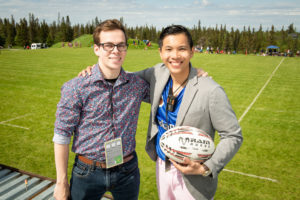 Also on the festival management team is UAA property management major Matthew Vincent (left), who was in charge of media relations for the event. (Photo by James Evans / University of Alaska Anchorage)

In order to stay in Anchorage longer, Phu applied for a student visa and enrolled at UAA's College of Business and Public Policy. There he learned the necessary organizational skills that would come in handy when it came time to take over the festival.

"The communications class was the perfect class to attend. [The professor] delivered a very clear message: You need to draft you proposal in a concise way, you need to follow up, and you need to always communicate with your team," said Phu. "Come to the organization side, as the festival director I have to do the financials, and the property management class was able to teach me a clear, logical way of how to do budgeting."

In those same classes, Phu met many of the people he would later bring on to help him expand the festival, including property management majors Matthew Vincent and Ismael El Moussa, marketing alumnus Hugo Espinoza, political science major Paul Melin, and English major Clint Sengmany.

With the festival a success, Phu's next priority is what he's going to do after graduating from UAA this summer. He's currently fielding job offers from residential companies in California and Arizona, both places notably warmer than what he's gotten used to. Whichever he chooses, Phu considers the future "bright," and looks forward to growing the rugby community wherever he ends up. 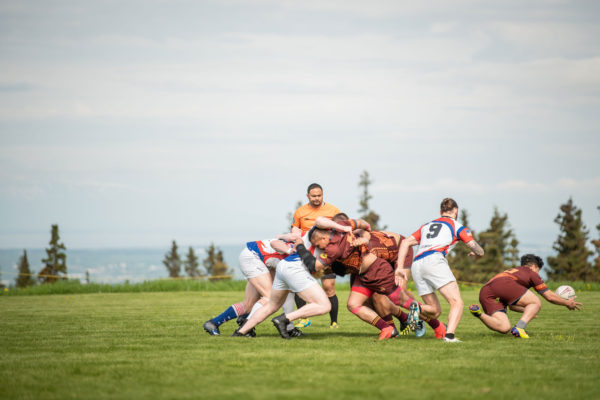