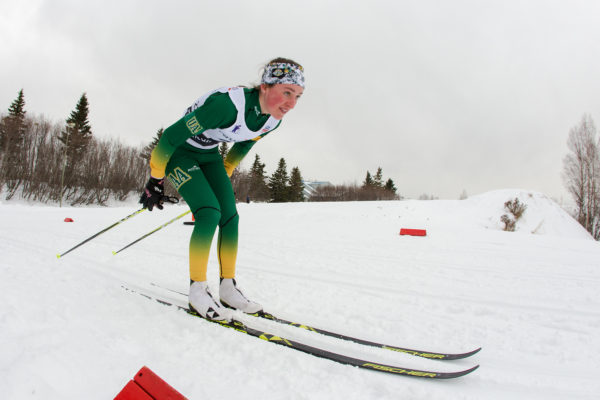 Seawolves Nordic skier and environment and society junior Jenna DiFolco has been skiing since she was 2 years old. DiFolco attributes her skiing prowess to her parents, who met while competing in a biathlon in Fairbanks. (Photo courtesy of UAA Athletics)

To borrow from the books and show Game of Thrones, winter is coming. To prepare, many have begun - some begrudgingly - the annual ritual of storing away their shorts and sandals, and digging up their sweaters and boots. For skiers, that process also includes breaking out and tuning up their skis and thinking about when they can finally hit the trails.

Unless you're Seawolves Nordic skier Jenna DiFolco, who's been preparing for the yet-to-arrive ski season all summer.

"There's a saying: 'Skiers are made in the summer,'" says DiFolco." The bulk of our training is unique from a lot of other sports in that there's a lot of training volume that has to happen before you can be at a competitive level. So in the fall we do lots of roller skiing, and we look kind of ridiculous zooming around campus, but that's how we can replace skiing. There's also lots of running, biking, and strength and conditioning. I like summer and fall training more than winter because there's so many more things you can do and more places to do it."

DiFolco attributes her skiing prowess to her parents, who met while competing in a biathlon in Fairbanks. She recalls being put on skis at 2 years old, and has been competing in club and school teams ever since.

While growing up with parents who literally blazed a trail for you can seem intimidating, DiFolco says her parents have been nothing but supportive, sometimes even serving as a source of training advice based on what has and hasn't worked for them.

"I liked the team best, I liked the coach best, and the location was away from home but not too far," says DiFolco. "I've been in lots of club teams and high school teams, and this is by far the closest I've ever been to a team and coach. It sounds cliche, but it's like a second family to me. I think that's the reason I love it so much is because of the people I do it with." 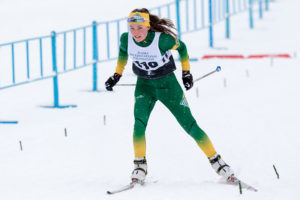 Originally undeclared until halfway into her freshman year, DiFolco discovered the environment and society major that so perfectly encapsulated her two passions: biology and politics. (Photo courtesy of UAA Athletics)

According to DiFolco, competitive skiing is the perfect combination of team cohesion and individual performance. Each skier is ranked on their own, but those scores are added to a single team total and only the top scores are considered.

"I know people that play sports in high school and they join the cross country team and go, 'This is work.' But they keep doing it because even though it's hard physically and it is an individual sport, there's the team aspect that makes it fun because there's not the pressure of dropping the ball and losing the entire team the game," says DiFolco. "And it's something anyone can do. There are 85-year-olds still on the trails and racing even, which I think is unique for that sport. It's for anyone and everyone, for all ages and abilities, which I think is what makes it so special."

When DiFolco isn't training or actually skiing, she's a junior majoring in environment and society with a minor in political science. Originally undeclared until halfway into her freshman year, DiFolco discovered the major that so perfectly encapsulated her two passions: biology and politics.

"I didn't want to do either or, but I also couldn't do both because that's too much," says DiFolco. "Then I found this major and it was perfect. Environment and society combines the hard science I like and the people side. It's about the effect humans have on the environment and I think that's critical. Like climate change, it's the biggest issue society is facing because it has so many other cascading issues. Income inequality and health problems, all these other big issues can often be rooted back to the environment."

Once again, DiFolco credits her mother for another one of her passions. Growing up, she would often accompany her mother, who was an ecologist for the National Park Service, to do fieldwork in the Brooks Range or Denali National Park.

"When I was a kid, I kind of took for granted having the opportunity to get hands-on experience. I had to because my mom did it, so it wasn't as fun," says DiFolco. "Now that I'm older, I'm realizing I was able to have those experiences because Alaska and all of our resources are at the forefront of a lot of these climate changes. Everything you learn in environment and society is applicable to Alaska." 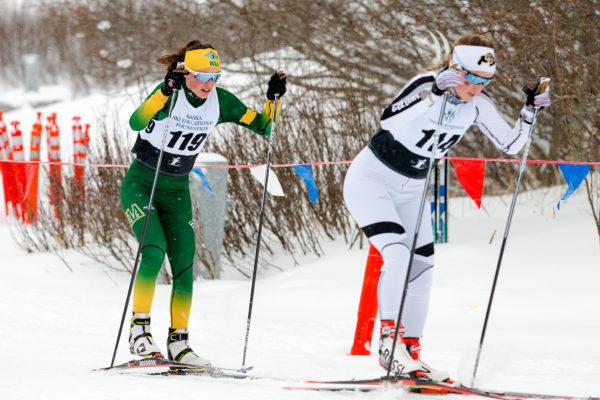