The University of Alaska Anchorage was named to the 2010 President's Higher Education Community Service Honor Roll by the Corporation for National and Community Service (CNCS) on Thursday, May 12. The Honor Roll, launched in 2006, annually recognizes institutions of higher education for their commitment to and achievement in community service. 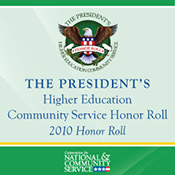 UAA--the only school from Alaska on the list--is among more than 600 colleges and universities from across the nation to be honored for exemplary, innovative and effective community service programs. UAA was recognized by the highest levels of the federal government for its commitment to service and civic engagement on campus and beyond.

"As members of the class of 2011 cross the stage to pick up their diplomas, more and more will be going into the world with a commitment to public service and the knowledge that they can make a difference in their communities and their own lives through service to others, thanks to the leadership of these institutions," said Patrick A. Corvington, Chief Executive Officer of CNCS.  "Congratulations to the University of Alaska Anchorage and its students for their dedication to service and commitment to improving their local communities. We salute all the Honor Roll awardees for embracing their civic mission and providing opportunities for their students to tackle tough national challenges through service."

President Obama has pledged to make service a central cause of his administration and wishes to commemorate the significant role that higher education institutions, their students, staff and faculty play in helping to solve pressing social problems in the nation's communities.

Learn more about this important designation and see a full list of recipients.