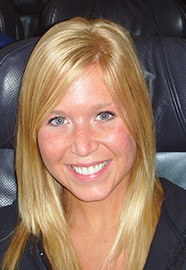 Tabatha Harris has spent a lot of time in jail. She is working as a case manager in the Denver County Jail Women's Mental Health Transition Unit as part of the Prisoner Reentry Program. Most of the women in the unit have a dual diagnosis of mental illness and substance abuse, and many have a history of trauma. Their offenses range from traffic charges to murder. Harris assists these individuals in working through problems in a positive way, as well as finding resources for them upon release.

Originally from Juneau, Harris was in the top 10 percent of her high school graduating class which qualified her to be a UA Scholar, receiving a four-year scholarship to attend any University of Alaska campus. She decided to take advantage of this great opportunity and found UAA had the best option for her desired field of study: justice.

Harris embraced the college experience, by asking her professors a lot of questions, taking on leadership roles in the National Honor Society called Alpha Phi Sigma and the Justice Club, and working with faculty on Justice Center research and service projects. She worked at The Alaska Club and played intramural basketball to keep active outside of the classroom. To gain more experience, Harris took an internship with the Anchorage Department of Corrections, Probation and Parole. She graduated from the University Honors College as a University Honors Scholar in 2007.

After graduation she went to Colorado to help take care of her grandparents and started work at the Boulder Juvenile Justice Center. She did transports and worked as a juvenile corrections officer.  She also worked for a while as a food stamp technician on the Homeless Ongoing Outreach Team which involved case management for recipients of food stamps and other government assistance programs.

The Denver County Sheriff's Department applied for a grant through the Department of Justice to fund Prisoner Reentry Programs and Harris was hired in April 2009 as a case manager. She works within a dorm of approximately 30 women that have all been diagnosed with an Axis I Mental Health Illness. The charges that the women are in on range from possession of drug paraphernalia, prostitution, traffic charges to the most severe: murder.

Harris says, "Working with the women has been very rewarding, although very challenging at times. The biggest problem that I see is that they are homeless and once released they go back to the streets because it is familiar. We work hard on forming connections with the community to take in the clients, but unfortunately a lot of the clients burn the bridges faster than we are able to repair them."

Although very challenging, this program through the Denver County Sheriff's Department and funded by the Department of Justice has shown that it contributes to reducing recidivism, maintaining safety, and lowering expenses as women stay out of jail longer and use positive coping skills in place of medications.

Harris says inmates have responded very favorably to the program. Within the dorm, a large room with 15 bunk beds, are women with a variety of disorders. They have behavioral issues that go against the norm, compounding the mental health and drug addiction disorders they may have. Harris works with a psychiatrist and a psychologist to do a needs assessment daily on the inmates. In the year-and-a-half since the program began, only one fight broke out in this dorm. Other dorms can average a fight a month.

A lot of what Harris does is teaching inmates how to get along. These are basic skills most parents share with their children, but unfortunately, these women weren't taught or haven't used such skills in many years.

This is also a place where women feel comfortable enough to open up for the first time about the experiences they've had. Harris listens to their tragic stories and realizes it is a chance to work at empowering them.

"Sometimes you wonder how these women have handled the abuse and tragedies and then you realize, well, that could help explain how they got into the habit of doing drugs and became incarcerated," she says.

Harris explains how women are invisible in the justice system. Circumstances for women are different for a variety of reasons, one being that women are usually primary caretakers of their children. What happens when you take a woman's children away from her? What happens to the children? The program works hard to get gender specific programs for inside jail and with community members to facilitate successful transitions.

She also volunteers with Colorado Youth at Risk and meets with a 15-year-old girl once a week. "I've learned more from her than I have from many others," says Harris, "basically, how to communicate with someone who doesn't communicate back. Sometimes it takes her a while to get to the subject of the matter and she also talks to me about the difficulties of communicating with her own mother." Harris flips this insight to help inmates she's working with who have teenaged children. She learns different techniques to break through those natural barriers between parents and kids, especially when amplified by other issues these women have due to their mental health, drug problems and incarceration.

It can be discouraging at times to work so hard with a woman creating a plan and have her not follow through, so Harris tries to match the commitment of each woman to her individual program. Then she says, they feel good about the work they put in on themselves "Everyone has behaviors for which there are consequences, so it's up to them to learn how to gain back those privileges. Our job is to empower them."

Harris is continuing her education by working on her master's in social work. "Even with my passion for the job, I do make an effort to stay active and take the time to find balance in my life. I've created my personal boundaries over the years to keep from getting too involved personally. I get out and enjoy the beautiful weather here in Colorado. I do have my occasional moments of self-pity, but I realize I really have it good compared to the women I work with."