Reserved and thoughtful, Robert Stormo creates an interesting contrast to the vibrant colors splashed on the walls at the Alaska Teen Media Institute (ATMI) office where he works. As assistant director, Robert provides a solid base and encouraging input for the students who get to run the show. 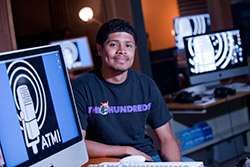 Robert's father was in the Air force, so his family traveled a lot. They landed in Anchorage for Robert's senior year of high school and wanting to keep a close connection with his family, Robert enrolled at UAA. He says he realized he was a little naïve that first year, not adjusting seamlessly to the rigors of college-level study. But then he decided "this is serious" and upped his effort and involvement.

With an interest in media, he took classes from the Journalism and Public Communications (JPC) department. During an introductory journalism writing class he learned from a classmate that UAA's student radio station, KRUA, needed a sports director. Armed with minimal experience but a big interest in sports, Robert applied and got the job. Within a few months he learned how to write solid stories and after that his life revolved around radio and school.

Dr. Fred Pearce, dean of the JPC department, says, "Robert is hard-working and earnest. He used KRUA exactly as one should: to perfect his craft."

Robert graduated from the University of Alaska Anchorage in May 2007 and transitioned to a broadcasting company in Anchorage. Then, he joined ATMI in September of 2009 as an employee, after already spending time there as a volunteer.

If you can't beat 'em, join 'em." This is, roughly, the philosophy of ATMI, a group committed to giving teens the tools and opportunities needed to tell their stories through the media. ATMI believes that youth voice is a valuable perspective that is underrepresented in the mainstream media. The group, a program of the media-based project Spirit of Youth, has spent the last six years working with Alaska's youth to produce a monthly half-hour radio show that broadcasts on their local NPR affiliate, KNBA 90.3 FM.

Robert says, "I help students with different media projects. I work with some really bright and talented kids. They come in with great ideas." He helps them set up interviews, edit stories and prepare for their monthly radio show, "In Other News," based on what they think is significant. "It's up to them to decide where their project will go." The students are encouraged to think about what is important to them, what's going on in their school and in their life, and come up with story ideas based on that.

For the most part, ATMI members are high school students, but occasionally the group will involve eighth graders with an interest in media. When the group is looking for new members, Robert or Director Rosey Robards go to media classes at local high schools, inviting interested students to see what ATMI is all about.

The ATMI office is like a vibrant family room. Members will often bring friends who end up getting involved, too. Even those who've graduated from school and moved away will stop in to visit when back in town or home from a college break. Because of the work created by the students, ATMI has built a solid reputation in the community. Organizations contract ATMI to conduct media skills training, create public service announcements or create promotional videos, and the students are always the leads on those projects.

Rosey says, "We provide a safe environment where kids can be successful. There are positive adults and the kind of learning that goes on here is worthwhile. By handing over ownership of the media to youth, ATMI gives teenagers the opportunity to share positive stories about their generation, which the traditional media often overlooks in favor of stories about crime, drug use and dropout rates. ATMI successfully incorporates positive youth development into their radio program, creating a more positive media climate for Alaska's youth."

Robert says he likes the work because of the variety. "This job is so different every day. I could write down every morning how I thought the day would go and compare those notes at the end of the day to how it really went and it would never match up."

So, even though his family has moved on, Robert says he is happy with the interesting community he has grown into here in Anchorage. "Right now I am content where I am."