Evelyn Davidson, coordinator of Kodiak College's Learning Center and Department of Developmental Studies, was recently awarded the 2010 "Staff Make Students Count" award for UAA at the UA Board of Regents meeting in Anchorage on June 3, 2010.

Davidson was cited for her excellent work with and for students at Kodiak College, as well as fulfilling service to all UAA students as co-chair of UAA's Advisory Council for Enhancing Student Success. She was selected from all regular full- and part-time staff employed by UAA.

President Mark Hamilton, in one of his last official duties as University of Alaska president, awarded three citations, one each to staff members of UAA, UAF and UAS. Hamilton said, "The recipients of this award are staff that every single day make people proud." Upon reading the nominations, he concluded that, "These are some of the most wonderful people you can imagine and they make people proud of their work, their colleagues and being part of a wonderful institution." Winners for UAF and UAS include:

The Staff Make Students Count Award, established in the spring of 1999, recognizes University staff who have provided outstanding service to students anywhere in the UA system, including rural campuses and extended sites. Nominations for the awards are rated on clearly demonstrated student support through excellence in actions, jobs, activities, conduct and attitude. 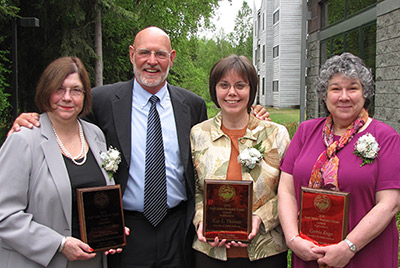