After receiving his undergraduate degree from UAA in history, Davin Holen spent two years in West Africa in the Peace Corps with his wife Cara. Upon his return he learned about UAA's new anthropology master's program. It had already filled with the allotted 12 students, but he was fortuitous enough to be allowed in as number 13. He started in fall 1999 and was the first to graduate from the program in 2002. 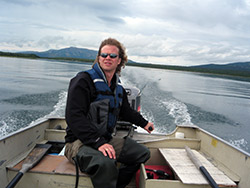 "I really enjoyed the program. I think they set the bar very high and it was a good, quality education. There are some great professors who helped prepare me for working in this field, such as Kerry Feldman and Stephen Langdon; Dr. Langdon especially helped me to learn the theoretical aspects of anthropology," says Holen.  "This really helped prepare me for my current Ph.D. studies at UAF."

During graduate school at UAA Holen had an internship with the Subsistence Division of the Alaska Department of Fish & Game and was hired there in January 2002.

"This job is a nice mix of fieldwork, research and writing. It is a meaningful job - the work we do actually makes a difference in people's lives. For example, I collect a lot of harvest data that is utilized by those making decisions on regulations that affect rural communities," says Holen.

That blend of field and office work allows him to spend time with his growing family while immersing himself in the intellectual stimulation of learning new ways to conduct research. During travel to international conferences, he often receives notice that the work the Subsistence Division is conducting in Alaska is not only important but innovative, especially within the realm of the Arctic.

For example, he compiled a spatial analysis of caribou harvest data into a map, creating a clear and informative resource for the Board of Game decision makers, as they seek to understand subsistence patterns.  Holen is also working on part of the Environmental Impact Statement concerning subsistence use in the area near the proposed Pebble Mine. "If we do our job right and do it well, the data speaks for itself."