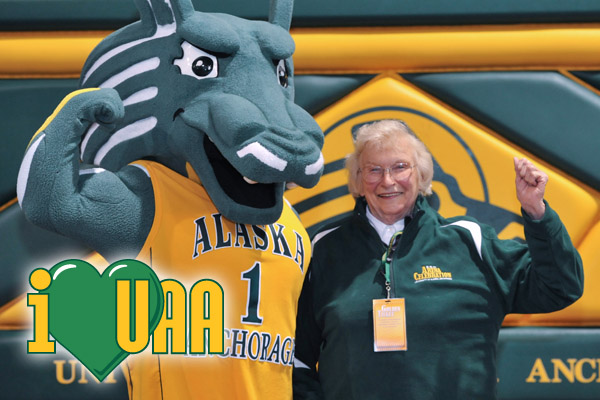 "I love what education does for people and how it can change lives," says Arliss Sturgulewski, longtime Alaskan and state civic leader. "My interest in UAA came out of both my knowing what it takes to get an education as well as seeing it as an integral part of the community."

Arriving in Alaska before it was a state in 1952, shortly after she earned her B.A. in economics and business from the University of Washington in 1949, Arliss immediately got involved in the community around her. She played a role with the League of Women Voters in bringing together local governments in Anchorage and was a part of the movement for a statewide university system, starting with the transition of the Anchorage Community College into the University of Alaska Anchorage in the early 1970s.

"I've been both a neighbor to this campus and also a supporter of the whole UA system," says the former Alaska state senator. "That cooperation of outreach to individual communities while keeping in mind the needs of the whole state is the benefit to having a statewide system. I think UAA has a great role to play in bringing this state together and training the people we need to take part in the jobs that are here."

Arliss has a long list of civic achievements statewide and her consistent contributions to various UAA advisory boards and university initiatives earned her an Honorary Doctor of Laws in 1993. More recently, her support of the university came in the form of an art donation — 36 prints by Alaska artist Fred Machetanz.

"I decided instead of keeping things under my bed gathering dust, that I'd start to make some of those available to the university," she says. "I think artwork is a wonderful way for those who have loved UAA to make contributions to the university of some of their treasures."

Arliss' love for UAA stems from her personal experiences with education and her commitment to public service. "I've been delighted to see the university grow over the years, and to serve the young people (and not so young people!) of the state."