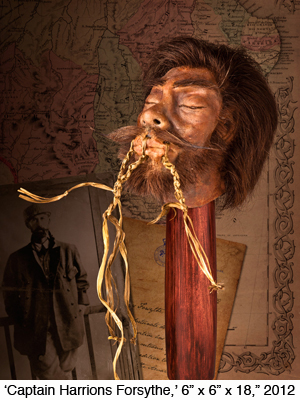 The reception will be held on April 30 from 5:30-7:30 p.m. There will be free parking in the Fine Arts Building Parking lot area starting at 5 p.m. that day. The show will run through May 4.

Artist Statement: At age 77, my uncle Carl Gammon, was still determined to strike it rich and spent the months prior to his unfortunate death going to auctions searching for items he could buy cheap and sell at a profit. March of 2006 found him at an Unclaimed Storage Auction hosted by the Alaska Auction Co. in Anchorage. He returned home with his F-150 loaded with boxes and wooden crates that seemed to have been in storage for decades. Sadly, he never opened those boxes, and after a year and a half of probate they finally came into my possession.

I was stunned when I explored those crates and found a total of thirty-seven bizarre artifacts, each with their own display cards and paperwork documenting their provenance. After consulting locally, I was eventually put in touch with Niklas Gerhardt, curator of the Kuriositätenkabinett, a prominent Museum in Berlin. After viewing the photos I sent, he visited in person and reviewed the items in the collection.

The Gammon Collection, as it is now known, is as varied as it is odd. Most of the pieces seem to have been displayed previously, probably in a small museum or private collection. Research has turned up links with the Great Plains Society for the Dissemination of Information and Education, a roadside museum operating in Nebraska from 1937-1954. After the museum closed, the collection seems to have disappeared. It resurfaced here in 2006, at auction due to the death of the previous owner, Wilford Kearney, whose heirs were never located.

The bulk of my uncle's legacy has gone overseas to be catalogued and displayed initially in Berlin, but in 2014 it will go on a tour of Europe and the U.S. I held back the items you see today, the ones I find most interesting. With the kind permission of the UAA Art Faculty, I am presenting these pieces as my BFA Thesis project, so that Anchorage is able to get a glimpse of his incredible collection before the rest of the world.