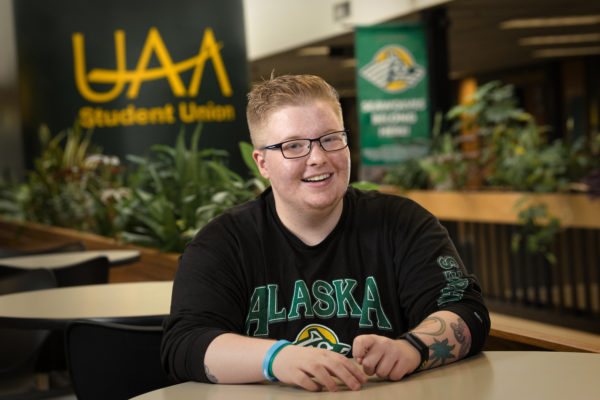 UAA psychology major Benjamin Miller is the recipient of the Benjamin A. Gilman International Scholarship and is studying abroad in South Africa this summer. (Photo by James Evans / University of Alaska Anchorage)

"I have pretty much always thought that I was never going to go to college," said UAA sophomore and psychology major Benjamin Miller. Miller is the recent recipient of the Benjamin A. Gilman International Scholarship, a grant program dedicated to enabling students with limited financial means to study and travel abroad.

Throughout his entire life, school had been hard for Miller. For a long time, he suspected he had some undiagnosed learning disabilities that made excelling academically challenging for him. He'd always been told that he was a fun, bright, young kid, but school just "wasn't his thing." After hearing that for so long, he accepted what he thought was his. Shortly after failing out of high school, he went into the foster care system.

Miller admits it was a rough start, but he was still hopeful for his future. He was living in Juneau at the time and had a stable job as a cook making pretty good money. He figured at some point he would earn his GED. Throughout the next year, he shuffled through a few foster care homes, one of which was located a little way out of town, causing him to have about a 20-minute commute on the city's transportation.

And that's when life threw a curveball, in the best kind of way.

"I met a guy through this commute who ended up being a pretty good friend and mentor," said Miller. "He said I should go back and finish and get my GED. So I did — in less than a week." Which, according to Miller, shocked everyone. That's when the word "college" started getting tossed around. He said he was skeptical and hesitant about pursuing higher education because he didn't want to waste his time and he was "so bad at school."

But, at the time he was interested in pursuing a degree in the health sciences and started his higher education journey at the University of Alaska Southeast. He enjoyed his classes, but soon realized the medical sciences was not for him and was again at a crossroads. It was then that UAA's Child Welfare Academy reached out to Miller, encouraging him to apply to the university and offering a scholarship that would pay for 144 credits.

"I thought wow, that's a lot of tuition, that's a whole degree," Miller said, who hesitated again because he was still unsure what he wanted to do. On a whim, he decided to check out UAA's campus. "I actually just fell in love with the campus and could really see myself going here."

So Miller decided to go for it - what did he have to lose? He applied for the scholarship, asked his mentor and friend for a letter of recommendation, and a few weeks later he received a letter in the mail formally welcoming him to UAA.

"That was really jarring for me because I hadn't even finished high school," said Miller of when the letter came. He'd written off school a long time ago and college hadn't really crossed his mind, and now suddenly the door had been swung wide open for him. "I was able to go and get diagnosed for my learning disabilities and spent the summer at UAA completing some prerequisites."

Miller was still unsure about what he wanted to pursue now that he was a full-fledged college student. At the start of the semester at Campus Kick-Off, he came across the International Affairs table, which had information on studying abroad.

It was a moment of clarity. Since he was young, Miller had dreamed of traveling to South Africa. There was one hitch: he was a freshman and wouldn't have the credits to make the cut. But with his summer credits and full year under his belt, he could travel during the summer of his sophomore year.

So Miller dove head first into his classes, made the Dean's List and enrolled in the university's Honors College.

"If you had told me I'd be doing all this the day I failed out of high school I would have said, 'No, that's not gonna happen to me,'" said Miller.

As he was making plans for his study abroad in South Africa, he happened to be taking a linguistics class and fell right into what he'd been wanting to study all along, he just didn't know it.

At the time, Miller had declared a minor in Spanish and was working on becoming fluent, but realized that language as a whole fascinated him.

"I'm really into language science and how we use it to communicate and what makes it unique to humans," Miller said. "So I changed my minor to linguistics and started looking into South African languages; I'd always known that South Africa was big for languages, and now I had a real reason for going there to study."

Miller launched into the language aspect of South African culture, saying that there are 36 languages spoken in households across the country, with 11 officially constitutionally protected. He explained that the country is a hotbed for languages from Afrikaans to South African Zulu and many languages, as well as their dialects.

He was beyond excited, but didn't quite have the financial means to support his study abroad adventure, which is when he decided to apply for the Gilman Scholarship.

Miller left for South Africa in mid-May and has settled into his home away from home for a summer intensive of learning the Afrikaans and Xhosa languages, as well as learning linguistic anthropology. He's taking 12 credits, a whole semester's load of work in a few short months.

"It's about as far away from Alaska as you can get without wrapping around back towards it," said Miller of his trip. He knows it's going to be hard and he's a little nervous about traveling out of the country and taking university-level courses with a language barrier. But Miller's done a lot in his life thus far that he'd never thought he'd do and this is one more he's adding to his growing list of accomplishments.

"I was always under the impression that I wasn't going to do well at school," Miller said, but UAA and the people at the university who have helped him, have really changed his perspective of not only study and academics, but of himself, and who he is as a person. "It was brutal at first and I had to come to terms with that I wasn't actually that bad at school. I really like the culture at UAA, people have always been really involved and caring about what's going on here and its students."