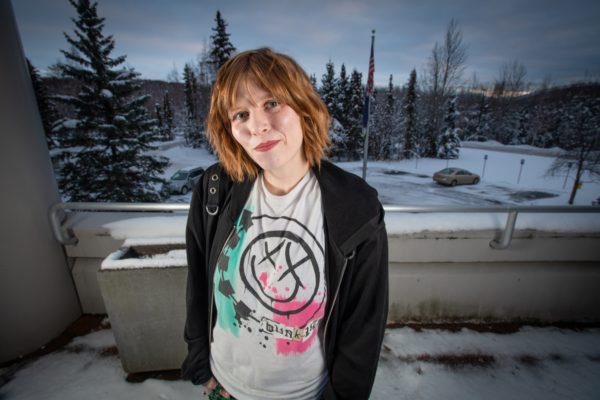 If there's only one thing student commencement speaker Rose Kruger regrets about her time at UAA, it's not being able to run for president of the Union of Students of the University of Alaska Anchorage (USUAA), which she attributes to starting college later in life and waiting until her sophomore year to get involved.

"It's really easy to keep your head down, but you have to make an effort to be connected and be a part of the campus," said Kruger. "Once I got involved, I realized there's such a small pool of actively involved students. After you get your fingers in it, you get a feeling of responsibility. If you don't pick up these roles, you don't know if anybody else is going to step up."

Instead, Kruger will have to settle on the myriad other student leadership positions she's occupied over the years, from starting as co-founder of the Society of Physics and Astronomy Students at UAA, then on to business manager and vice chair of Club Council, and culminating with her current position as sergeant-at-arms and chair of the USUAA Rules Committee, just to name a few.

Through her work with USUAA, Kruger hopes to keep UAA open access and affordable, which she credits with bringing her back to Alaska from Washington after taking a break from school.

"I feel like I represent UAA fairly well because we've got a lot of nontraditional students who are older like me and don't live on campus and are returning to get our degrees after taking some time off," she said. "I think all of our nontraditional students are a sign that UAA is actually ingrained in the community. Being open access allows any Alaskan who's willing to put in the time and effort to chase their dreams and graduate."

Additionally, Kruger uses her USUAA position to serve as a resource for students who may resemble her during her first year back at UAA, students who may need assistance figuring out whom to call, which office to visit or what form to fill.

"I see student government's job as being the ones to navigate the system so regular students don't have to," she said. "If someone in my class has an issue, they can tell me what it is and I can tell them exactly who they should talk to so they don't have to spend three hours googling who can fix the problem. A lot of times, things are easily fixed if you just know who to talk to."

A German and English double major, Kruger decided to get involved on campus after her German professor recommended she start building up her leadership experience to increase her odds of landing a Fulbright Scholarship, which she hopes to use to live in Germany while teaching English and pursuing a master's degree.

Kruger is already familiar with the prospect of living abroad, having spent time after high school in Aachen, Germany as an exchange student with the Congress-Bundestag Youth Exchange for Young Professionals.

Born and raised in Palmer, Kruger developed her interest in the fundamentals of language and rhetoric while taking speech therapy and witnessed firsthand the life-changing impact a teacher can have on a student.

"All of the people who have really encouraged me outside of my own family have been my teachers, and I think I'd do well in that role and be able to give back what I've gotten over the years," she said.

Kruger isn't waiting to make an impact. In addition to her duties at UAA, she juggles four jobs, including one teaching preschoolers at a German immersion program. Kruger also plans to use her commencement speech to inspire her classmates by reminding them of everything they've accomplished as Seawolves, especially these last two years.

"Student commencement speaker Rose Kruger on the importance of putting in the effort" is licensed under a Creative Commons Attribution-NonCommercial 4.0 International License.