A delegation of government and industry officials from Japan recently visited the UAA Aviation Technology Division (ATD). The Japanese delegation was led by the Japan Civil Aviation Bureau (JCAB) who was being hosted by the FAA Alaska Region Office of International Affairs. The delegation's chief interest was Next Generation Air Traffic Management (NEXTGEN). The FAA's NEXTGEN plans rests on technology known as Automatic Dependant Surveillance Broadcast or ADS-B. UAA Aviation played a significant role in the Alaska Capstone program which represented the first wide-scale deployment of ADS-B in the national airspace system of the United States. The delegation was also interested in the State of Alaska's pursuit of a Self Equipage Incentive Program (SEIP) designed to make the new technology affordable for the pilots of Alaska.

UAA's Leonard Kirk briefed the delegation on the University's role in ADS-B development and deployment in Alaska and ensuing safety benefits realized by the deployment of ADS-B. The delegation was well prepared and the presentation was followed by an extensive question and answer session. The delegates then took part in a "hands on" demonstration of the technologies flying one of the UAA/ATD simulators equipped with the NEXTGEN technology.

Following the visit to UAA/ATD the delegation traveled to Juneau, Alaska to learn about the FAA's experience with NEXTGEN technologies in the difficult terrain of Southeastern Alaska. 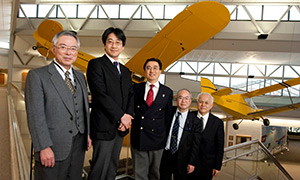