After receiving a full-ride scholarship from UAA, Fullerton moved up to Alaska from Flower Mound, Texas in August 2007. But for a while she questioned whether she wanted to pursue gymnastics in college. "I started gymnastics very young and by the time I was five years old I was on a team competing." From that point on she would live and breathe gymnastics up until high school. 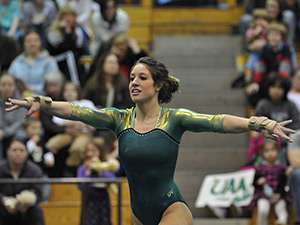 Fullerton was public schooled until her freshman year. "I was home-schooled my freshman year and it allowed me to practice gymnastics more. So, from 6 to 10 a.m. I would practice at the gym, then work on school, and go back to practice from 4 to 6 p.m." This gymnast was training for about 40 hours a week throughout high school, which is not unusual in gymnastics.

It didn't take much longer for Fullerton to question her passion. "I was so burned out on gymnastics. I wanted to try something new. A lot of gymnasts convert to diving, so I thought I would give that a shot," she said. After a year, Fullerton realized that if she wanted to go to college for a sport, she would have to go back to gymnastics. "I watched several people dive who had practiced since they were young, and like gymnasts, they start training very young. I couldn't compete with those people who had trained their whole lives to dive. I was good at gymnastics, and I loved it, so I decided to go back."

But it wasn't that simple. She had to re-train herself. The time she had spent in diving had affected her and she had to get back in 'gymnastics shape.' After more hard work and dedication, Fullerton found herself accepting a full-ride scholarship to UAA. "I traveled up here in November and fell in love with Alaska. Coming from Texas, we don't get 'real' snow, so Alaska seemed like an exciting and good choice."

In August of her sophomore year at UAA, Fullerton hurt her shoulder. This was one of five major surgeries she's had. "I've had so many that I wasn't really nervous about surgery. I just wanted to heal so I could compete again." After enduring the shoulder injury, Fullerton wasn't able to compete her sophomore year. But now, she is back and feels strong.

Being a gymnast at UAA is no easy task. Gymnasts have to compete against each other for spots to travel out-of-state for meets. Only 10 of 16 gymnasts can travel with the team, so if someone gets hurt while competing, it's important to have another gymnast ready to take their place. As a result, it's critical for Fullerton to be in top condition, but also supportive of her teammates at the same time. "The nice thing about team gymnastics is that the judges take the top five of six scores. If you mess up, the team can bounce back from that. It's important in those situations to cheer on your teammates, and keep them motivated."

Fullerton says all the years spent juggling school and gymnastics taught her how to keep them in check. "This sport has taught me about the importance of time management through discipline and persistence," she said. Fullerton, 21, a marketing and business management major, is a junior and maintains a 3.0 GPA.