University of Alaska Anchorage students have a true friend in Carey Brown. He is passionately dedicated to helping struggling students succeed and his warm, approachable demeanor is a haven for anyone seeking comfort. 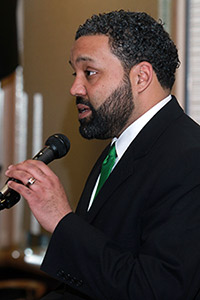 As interim director of AHAINA, Carey is in the perfect position to create positive relationships that support students' success. AHAINA is an acronym that stands for African American, Hispanic, Asian/Pacific Islander, International and Native American.  It is a multicultural center that focuses on continuously improving the quality of the collegiate experience for students of color on UAA's campus.

Growing up in Southeast Fort Worth, Texas, Carey had the opportunity to witness and experience some extreme social issues that stemmed from the blatant racism and gang activity in his neighborhood. It could have been too easy to fall in with the wrong crowd and never escape that lifestyle, but he had some outside influences that helped steer him down a more productive path.

Part of this influence came from visiting family outside of the city. It was there he was exposed to different television shows that showed him another way of speaking than he heard on his inner city streets. He recalls being impressed with the idea of putting together words eloquently and still telling the gritty stories of real life. Music is another genre that influenced Carey to focus on the positive.

"Music saved my life," says Carey. Conscientious rappers who are respectful, literate and eloquent young men communicated a lot of good to him. "It played a big part in me not going the wrong way in my life."

Carey also saw a great example of triumph over struggle by his grandfather, Leo Scott, who became the first black pharmacist in Abilene, Texas. In 1961 when Leo arrived in Abilene he faced overt discrimination, denied lodging and service at restaurants. But he took the pharmacist job and stayed in it for 28 years. He was also active in the church and community and became Abilene's first black councilman. When Leo passed away in December 2009, over 400 people came from across the country to honor and remember him for his many years of civil service and breaking down racial barriers. Read more about Leo in his news obituary and an article about his memorial service.

Carey seems to have some of that community service in his genes. He attended his grandfather's alma mater, completing his undergraduate studies in health administration at Texas Southern University in Houston. Carey says it was a challenging environment; he wanted to quit a few times.

Although people like his grandfather broke down a lot of barriers, Carey says, "It is still really segregated there. The racism is blatantly in your face. You can see it occurring." Nevertheless, he was proud to go there. The school is especially respected for the pharmacy program his grandfather graduated from and its Thurgood Marshall School of Law.

After graduation in 2001, Carey got a job in a hospital in Fort Worth as assistant to the director of admissions. Although he would learn over the course of his year there he really wasn't a fan of constant administrative work, it was an invaluable experience in that the woman he worked for taught him a lot about professionalism. She started at the hospital in the laundry room and in 20 years worked her way up to the position of admissions director. She showed him how it is the little things that will build you up to be a success.

When he left that job he took the opportunity to substitute teach where he realized what he enjoyed most is working with young people. He went on to work with the Texas Workforce Commission Youth Opportunity Center in a training coordinator position and it was then that he totally fell in love with helping kids like those from his neighborhood. He saw how they have nothing to do in the community and nothing to aspire to. He observed at an early age what bad things a kid can get involved in if left idle.

But he had some goals to complete first. One of them was to get his master's degree before he was 30. In search of something a little different, he also had fond memories of visiting his aunt and uncle in Alaska, so that brought him to UAA.

After getting his master's in public administration at UAA, he returned to Texas to see what he could do to help busy those idle hands of his community's youth. He took a job working with abused women and ran for city council in 2009 on a platform of "Community, Equity and Growth." He was interested in developing opportunities for folks to be active in constructive ways. Even though he didn't win the seat on the council, he did continue to work in service jobs like with the non-profit organization, Easter Seals, helping those with disabilities such as visual impairment find jobs, and with the Boys and Girls Club of Greater Fort Worth.

All these jobs where Carey helped people who are struggling try to find a better way in life prepared him to be a perfect fit for AHAINA. He is not a technically a counselor but every day he provides wise and experienced counsel to those students who walk into AHAINA. They may not know it at first, but whatever they are going through, Carey has likely experienced it himself or dealt with it intimately in one of his other jobs. The advice he gives ranges from a variety of social to educational issues.

"I talk to them like they are my little brother or sister," he says. He describes himself as a bridge for the students.

But Carey is not just a great listening ear. AHAINA provides workshops on a weekly basis where he identifies topics that are beneficial to the maturation of students on an educational and social level.  Topics include study skills, personal budgeting, time management, how to write an "A" paper and more.

Carey goes the extra mile and makes the effort to get to know all the students individually. He is passionate about teaching them the balance between the social and education aspects to being on their own and in the college environment.

"There are a lot of first generation students so they might have no experience with the university environment," he says.  In talking with them he seeks to learn where specifically they lack knowledge and then he tries to fill in those gaps for them. For example, if they lack experience with the money basics like budgeting or having financial credit, he'll make sure they get into those workshops and oversee their progress.

He also holds mixers in AHAINA for the students. He has hopes to create senior networking events where there will be opportunities to learn about professional skills such as appropriate e-mail writing, how to dress professionally, interviewing practice, etc.

His latest project is a summer bridge program for high school students, offering some introductory coursework and guidance to prepare them for college life in the fall. He has 15 students participating this year.

He eventually wants to open up his own youth program.