Like many Air Force children, Christina Geller moved around a lot growing up. When she was 6 years old, her family landed at Elmendorf Air Force Base in Anchorage, where she spent the majority of her life. Little did she know then that her future career in the United States Air Force would take her across the globe to Japan.

Christina hit the books hard in high school and graduated in the top 10 percent of her class, earning her a 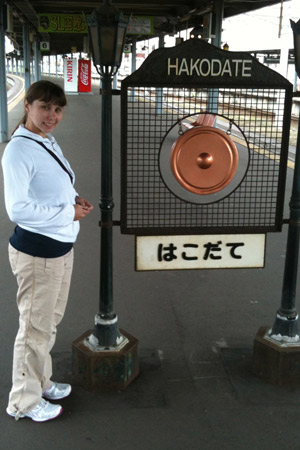 "I figured I would take advantage of the scholarship by going to school in Anchorage," said Christina. "I didn't have to worry about living in the dorms or trying to find a job that was flexible to meet my class needs. I was able to live at home and keep my job."

With a knack for numbers, Christina knew early on that she either wanted to become a math teacher or an accountant, but after witnessing an increase in teacher strikes and pay cuts, she opted to pursue a career in accounting. She earned an Associate of Applied Science in Accounting in '04 and continued on to earn her Bachelor of Business Administration in Accounting in '06.

About halfway through the baccalaureate program, Christina and her brother started talking about seeing the world by joining the Air Force, following in their father's footsteps. After meeting with a recruiter, Christina decided it would be best to finish her bachelor's degree and then pursue getting commissioned as an officer. Her brother joined the Air Force as an enlisted member while Christina continued on her path at UAA and joined the ROTC program at UAA.

Through the ROTC program, Christina formed deep friendships and strong leadership skills. "The ROTC program at UAA is fantastic; the staff was great and helped ensure that I was successful in achieving my goal of commissioning. I still talk to my classmates, and the leadership experience I learned helped make my career as an officer a lot better."

One of Christina's proudest moments was earning her bachelor's degree. "I was the first person to graduate from college out of my entire family," she said. An equally proud moment was the day she commissioned as an officer in the Air Force, another first for her family. Because of her strong number skills and degrees in accounting, she was selected to become a finance officer in the Air Force.

Christina worked at Elmendorf Air Force Base for four years before transferring to Misawa Air Base in Japan in 2010, where she currently works as a budget officer. She's in charge of a group that is responsible for the proper execution of base funds and military pay transactions.

Christina and her husband are enjoying learning a new culture and exploring their new home overseas. "The hardest part was getting a house, learning to drive on the opposite side of the road, and finding a car, all within the first week of arriving in an unfamiliar area," she said. "I joined the Air Force to see the world and love all the new places I have seen so far."

A scholarship recipient herself, Christina knows the impact a scholarship can have on a student. In addition to her University of Alaska scholarship, she also received a ROTC scholarship that paid for the remainder of her school. When a family member was unexpectedly diagnosed with cancer during her junior year at UAA, she was unsure if she'd be able to finish school on scholarship. "It all depended on what support my family needed," she said. Fortunately, the cancer treatment was successful and Christina was able to keep her scholarship and finish her degree.

"Scholarships helped me through difficult times, so why not pass on the thanks to someone else who may need just a little help? Not having money shouldn't prevent the dreams of someone determined to get an education."

Her goal for the scholarship is to help 10 different people start their journey toward earning a college education. Christina is looking forward to the first scholarship being awarded this fall.

Christina encourages others to give back to their communities, and her actions are inspiring change in others. After the Air Force ran a story about her scholarship to UAA, she was contacted by someone in Washington D.C. who was inspired to do the same thing. "It's very easy to do. All you have to do is take the initiative to get things started. And nothing says that you have to donate money either; your time is just as valuable."