It's safe to say that Mike Hendee likes the University of Alaska Anchorage. He likes it enough to earn two associate degrees, a bachelor's degree, a master's degree and a graduate certificate, all from UAA. 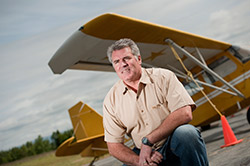 Mike grew up on a farm in the rural town of Erie, Colorado, and spent his high school years working on a dairy farm and playing football. After high school, he worked construction and started a roofing company with a friend.

A love for aviation led Mike to sell his share of the roofing company and move to Fort Collins where he worked as a flight instructor while majoring in physics at Colorado State University (CSU). He attended CSU until one of his flight students convinced him to join the Coast Guard, which he did in 1988.

Mike's orders sent him north to the Coast Guard cutter "Mustang" in Seward, Alaska. He served in the Coast Guard for about two years until there was a reduction in force.

Not ready to leave Alaska, he headed to Kodiak to commercial fish, which he did during the summers until '91. "I really enjoyed fishing," he said. "I thought I'd found my calling." But with the price of fish falling after the Exxon Valdez Oil Spill and Japan going through an economic recession, he decided that commercial fishing wasn't a sustainable career choice. He moved to Anchorage in 1991.

Turning his focus back to aviation, Mike worked as a flight instructor at Merrill Field and earned two associate degrees from UAA in 1992: Aviation Administration and Professional Piloting. It was after he completed his associate degrees that Mike realized he needed to pursue a four-year degree.

A fisherman buddy encouraged Mike to meet with a professor from the UAA School of Engineering. He did, and soon after enrolled in courses with the School. "It completely changed my career focus," he said. Mike earned his Bachelor of Science in Civil Engineering in 1995. "One of the best things I did was join the UAA Student Chapter of the American Society of Civil Engineers (ASCE)," said Mike. "We had a great time; we were a very cohesive group." Mike became president of the student chapter, which he considers a turning point in his career development. Later in his career, Mike became president of the ASCE Alaska Section.

There weren't many jobs available in civil engineering when Mike graduated, but he was fortunate to connect with a small engineering firm, Duane Miller & Associates, that jumpstarted his engineering career. For a long time, it was a two-man shop, and the pair did a lot of work in rural Alaska, giving Mike the opportunity to travel all over the state to work on projects. "Rural communities play a major role in the state's economy, from construction projects to logistics. I've seen parts of Alaska that most people haven't." Mike worked with Duane Miller for seven years before moving to LCMF to gain more design experience. There, he worked on civil and structural engineering projects in the North Slope Borough.

Mike started taking graduate courses at UAA, but rather than diving headfirst into a graduate degree program, he ended up piecemealing courses together. It didn't take him long to realize that he needed to finish his degree. "It's hard to go back to school full time with other commitments," he said.

"The UAA engineering program is fabulous," said Mike. "It's very intimate, and the caliber of people in the School of Engineering is wonderful. UAA developed out of a community college, and it kept that community spirit as it developed." Mike said that he felt like just a number at Colorado State University. "It was so large and daunting," he said. "Though the UAA School of Engineering is growing, it still carries that small school feel."

Mike taught "Small Wastewater System Design" last year as an adjunct instructor. He explained that many graduate courses within the School of Engineering are taught by adjunct instructors who are also engineering professionals, giving students a direct connection to industry partners.

Mike currently works for CRW Engineering Group as a project manager and senior design engineer. His focus is on water and wastewater projects in rural Alaska, including Shishmaref, Pilot Point and Shageluk.

Work and studying have kept Mike out of the skies for the past five years, but he's in the process of getting recurrent and hopes to get his own plane next year. He and his wife plan to move to Wisconsin in a few years to be closer to family.