The UAA Confucius Institute (UAA CI) and the Anchorage School District (ASD) teamed up this summer to send 12 high school students to China for the 2010 Chinese Bridge Summer Camp. The program, sponsored by Hanban, which oversees the Confucius Institutes, brings American high school students to China for two weeks of language and 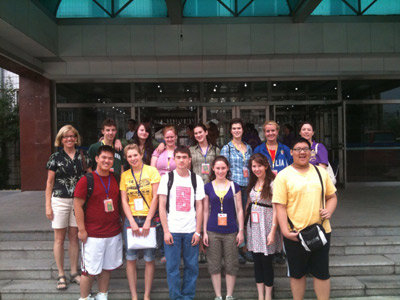 cultural study as well as cultural activities and experiences. The program is in its fourth year. This was the first year students from Alaska participated in the program.    Eight of the 12 students were from Anchorage but the statewide recruitment for the program also brought in students from Palmer, Galena and Kwigillingok. ASD provided two chaperones for the group, Sue Holway who is the curriculum principal of West High School and Natasha Graham, an English and history teacher at Service High School. The group spent several days in Beijing and in Changchun, the capital of Jilin Province about 500 miles northeast of Beijing.

In Beijing, the students were brought together with participating students from five other U.S. Confucius Institutes at UCLA, Minnesota, NC State, Montana and San Francisco State University.

While in Beijing they saw various music and dance performances, toured Tiananmen Square and visited the Great Wall. In Changchun the students studied language at the Number One Foreign Language School, visited local parks and natural sights, toured museums, got together with Chinese students for sports and entertainment and visited Chinese families.   All of the students performed in a great closing ceremony at a Confucian temple in Beijing. This inaugural group had an excellent adventure and hopefully will generate more interest in the program for next year.

The program was also an excellent demonstration of cooperation between UAA CI and ASD, and they look forward to continuing it into the future. The Hanban Chinese Bridge Summer Camp is held annually. Calls for applications are usually available in late March or early April. Students are responsible for their own air transportation to Beijing and back, plus visa application and travel insurance fees, but all other expenses are covered by Hanban. The UAA CI website will have information on next year's Chinese Bridge Summer Camp as soon as it is announced by Hanban.