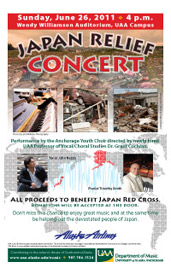 Internationally acclaimed Japanese tenor John Ken Nuzzo, who has performed with the Metropolitan Opera under the direction of James Levine and also extensively in Europe, will visit Anchorage on Sunday, June 26, as the featured artist in the UAA Music Department's "Japan Relief Concert" at the Wendy Williamson Auditorium at 4 p.m. Nuzzo will be joined by pianist Dr. Timothy Smith in a program that will include Romantic opera arias, music from Hollywood and Broadway and an appearance by the Anchorage Youth Choir directed by Dr. Grant Cochran. The concert's main sponsor is Alaska Airlines, with supporting sponsorship from other businesses and individuals.

John Nuzzo is well known to Anchorage audiences, having performed the lead role in Anchorage Opera's "La Boheme" to great acclaim last season. He also performed with pianist Smith in concert in Nagoya, Japan last August; the two recently gave a hugely successful concert this past January in Anchorage. Nuzzo will also be performing his signature "Shinsengumi" theme from the Japanese NHK television drama series of the same name. Nuzzo has received the Eberhard Waechter medal, awarded to promising singers in Austria, as well as the Idemitsu award in Japan.

Dr. Timothy Smith's skills at the piano have been appreciated by Anchorage audiences for many years; Smith recently was featured soloist with the Anchorage Symphony in Liszt's Concerto No. 2 in A Major. Smith has given over 50 concerts in Asia and will depart in July for another concert tour of China, with performances scheduled in Lanzhou, Qingdao, Chongqing, Guangzhou, Suzhou and Tianjin.

Dr. Grant Cochran, veteran conductor of the Anchorage Concert Chorus, has been recently hired as assistant professor of Vocal/Choral studies at UAA. The youth choir for this event will be singing three selections to close the concert, "Furusato," "Give Me Wings" and "We Are The World." The concert will also feature a slideshow of photographs from the devastation in Ishinomaki by photographer and aid worker Bob Williams.

Admission to the event is by donation; all proceeds from the concert will go to support the Japan Red Cross. For information on the concert, please call (907) 786-1524.