At UAA, you can meet the real life "Mr. Schue" from the hit TV show Glee-no, actor Matthew Morrison will not be at UAA, but-Alex Pierce, UAA music performance voice major and mastermind behind UAA's talented glee club, initiated the creation of the new club on campus. 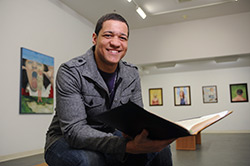 "The TV show [Glee] is so popular. I wanted to start something fun and exciting at UAA where students really get to showcase their talent, collaborate with fellow student musicians, have a say in what they're singing and have fun," Alex said.

"Anyone can join, even if you're not a music major," he said, "but you have to audition, of course." He formed the club in summer 2010 with just six members. Since then, the group has grown to 18. This emerging club had its first performance at the 2010 Freshman Convocation and since has held two concerts alongside the UAA Improv Troupe.

But what was Alex's motivation behind the creation? "Students' ideas should be heard," Alex said. As president of the club, Alex encourages other members to speak up and share their thoughts and ideas on performances and music. "Chances are that someone else in the room will have a great idea-better than mine or the next person's. If I'm singing only what I want to sing and having the rest of the club do that too, it's not fun for the rest of the members. The whole idea behind this is to have fun."

With that said, the club sings a wide array of different music. "It's mostly a cappella, with occasional piano or guitar accompaniment," Alex said. From Stevie Wonder to Katy Perry, Justin Timberlake, The Beatles and Jason Mraz, the Glee Club covers it all.

For Alex though, his passion in music drives most of his motivation. Raised in Ardmore, Pennsylvania, a suburb of Philadelphia, surrounded by a very musical family, it's no question where his affinity for music came from.

As many know, getting into the music business is tough. Alex grew up hearing many opinions from those who thought music was not a practical lifestyle. "My family inspired me and told me to do what I wanted. They said, 'You could be living out of a cardboard box, but if you're passionate about what you're doing, you'll be a success.'" His strong mindset eventually led him to UAA.

Philadelphia is a large city that had many schools with good music programs, but Alex was offered a music internship as the worship leader for the Great Land Christian Church in Anchorage. He still serves as the church's worship leader preparing the music for Sundays and training singers.

Now, Alex sees UAA in a different light than when he started. "The professors really take a personal interest in you as a student. They want you to succeed and grow," he said. Dr. Mari Hahn, associate professor in the music department, has encouraged Alex to lead on UAA's campus. "I told her about my idea for Glee Club, and she said 'If you want something new, then start it.'"

Once Alex moved to Alaska in 2006, his life changed. He met and married his wife, Merry, a UAA alumna. By 2008, he began performing in UAA shows and competing in Alaska's National Association of Teachers of Singing (NATS) competitions. Earlier this year, he placed 1st in the NATS Musical Theater Competition and 2nd in the NATS Classical Competition. Alex has also performed in Godspell, Singin' in the Rain and several other productions in UAA's music and theatre departments.

"When I'm on stage, I feel like I'm on vacation," he said. It's the instant feedback that Alex gets in a live performance that drives his passion to perform. "The purity of it is what does it for me, because when it's live, you only get one shot to get it right."

Alex hopes to one day be a private voice teacher and perform professionally in musical theatre. "I love Chicago. The city has an incredibly strong arts community. I'm also a huge fan of the architecture and the food."

Alex will graduate with the Class of 2012.