I AM UAA: Kris Homerding 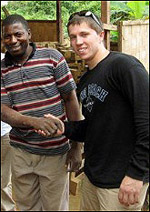 What started out as a mission to build his resume turned into a life-changing experience that senior civil engineering student Kris Homerding will carry with him for the rest of his years.

Kris, originally from Chicago, moved to Alaska in 2007 for a job and to spend more time with his grandparents in Anchorage. Before making the move north, he studied architectural engineering and played collegiate baseball at the University of Colorado at Boulder.

Kris worked on Alaska's North Slope for a year until he became an Alaska resident, at which point he enrolled in classes at UAA to finish his engineering degree. Upon arriving on campus, Kris joined the student club Engineers Without Borders (EWB-UAA) as a secretary--he's worked his way through the ranks and is now the club's president.

EWB-UAA--now almost 20 members strong--works to improve the quality of life in disadvantaged communities both at home and abroad. Working with professionals in the field, the group develops and implements sustainable engineering solutions.

During his time with EWB-UAA, Kris was one of three students that traveled to Tiko, Cameroon, Africa, in August 2010 to build a wood-burning cook stove and assess the water system for the Rhema Grace Orphanage, which serves about 60 residents in the small rural village.

Most recently, Kris traveled to Guatemala in May to assess and analyze four rural villages to be considered for potential future EWB-UAA projects. Possible projects range from building a schoolroom, creating an irrigation system to quench thirsty crops, to developing a retaining wall and drainage system for 1,500 families that live on a hillside prone to devastating mudslides.

"We help village residents identify problems and, based on what we learn, we propose solutions to those problems," Kris said. "To see children without their most basic needs is a real eye-opener."

When Kris isn't studying or traveling the world with EWB-UAA, he's busy raising funds for the club he's invested so much time and energy into. Under his leadership, EWB-UAA has raised more than $30,000 over the last two years.

Kris said that it hasn't been easy to balance his coursework and his many volunteer activities, but he knows his efforts will pay off--not only for himself but also for the others impacted by his work.

"I'm passionate about the club and the direction it's headed in," Kris said. "I'm really trying to build the club up and motivate others to get involved. This experience has transformed me over the years and I want others to be able to have an experience like I've had."

Kris is also a member of the University's student chapter of American Society of Civil Engineers (UAA-ASCE) and has represented the Seawolves at leadership workshops in San Diego, Calif., and at national competitions in Pullman, Wash., and, most recently, at home in Anchorage.

For his tremendous efforts and involvement with the UAA community and beyond, Kris was awarded the Second Bridge Scholarship Award in January 2011 and the Seawolf Student Leader Award in May 2011.

After earning his Bachelor of Science in Civil Engineering from UAA in December 2011, Kris hopes to land full-time employment with a local engineering firm, with an emphasis on travel. Down the road, he plans to pursue a career in project management and eventually own an engineering firm with his brother, Nick. He also plans to return to Guatemala in May 2012 and will remain connected with EWB-UAA as a professional mentor.

"I AM UAA: Kris Homerding" is licensed under a Creative Commons Attribution-NonCommercial 4.0 International License.