I AM UAA: J. Ellen McKay 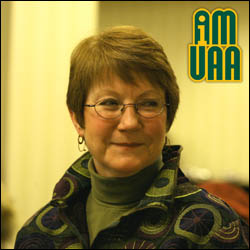 How many Volkswagens does it take to move to Alaska?

There's no punch line, but UAA alumna Ellen McKay may actually hold the record with three separate trips up the Alaska Highway in three separate Volkswagens, two Beetles and a Bus.

The first trip was in the winter of 1968-69 after her dad landed a job with Chugach Electric Association. A freshman in college between semesters and the oldest of four children, Ellen accompanied him on the road trip north in their 1966 black Volkswagen Beetle. Shortly after getting her dad settled, she return to Linfield College in Oregon as the spring semester resumed.

After spring semester of her freshman year, she headed home from Oregon to Idaho Falls, Idaho, helped pack up her mom and three siblings into the family's 1965 red Volkswagen Bus and headed north for a second time. Then it was back to Linfield for the fall semester of her sophomore year. Taking a brief hiatus from school to get married in the spring of 1970, that summer she and her husband made the final trip north in their 1961 green Volkswagen Beetle.

Once in Anchorage, she resumed her schooling at the then Anchorage Community College (ACC), earning her undergraduate degree in anthropology with an emphasis in archeology as ACC became UAA. After graduation in August 1977, and working for a while as an archeologist for the state, she realized that most job prospects in archeology were probably going to be seasonal and that she needed a skill to market for full-time work in the meantime. By February of 1978 she had earned her certificate in civil drafting from the department in which she is now senior faculty-Architectural and Engineering Technology.

"After I received my certificate, I went to work the very next day for a surveyor," she says. "Then, in 1980, this department called and said, 'You know, you were such a great student; we think you'd make a really good instructor.'"

She started as an adjunct the same year she had her son, Scott, and taught two nights a week at UAA and drafted from home for the surveyor.

"Then the woman whose job I have now, retired, and she encouraged me to apply. I had to think about that for a while, about whether I wanted to stop "doing" and start teaching, but realizing that I'd be more aligned with my son's school schedule helped make my decision. So in 1984 I was teaching full-time for UAA."

Ellen was recognized for her 30-plus-year career in 2011 with the Constructive Woman of the Year Award, given each year by the Alaska Chapter of the National Association of Women in Construction (NAWIC) to women who have demonstrated outstanding capabilities as construction professionals.

Among her career highlights are helping to write the curriculum for UAA's construction management degrees, hiring and mentoring other faculty members in her department and staying involved at the community level on the Anchorage Platting Board and the Zoning Board of Examiners and Appeals, which has included involvement with decisions regarding the current overhaul of the Title 21 municipality land-use code.

"The service component of my contract is one of the benefits of being a part of the UAA community," she says. "For the past 15 years I've served on land use boards or commissions for the municipality, and that has been very satisfying."

And she encourages her students to get involved as well. "To see development happening in your own community is very exciting. Local law has the most impact on you day to day, and it's the law that you have the most control over and the most input into. So I try to get that message into my classes as well, particularly the civil classes." 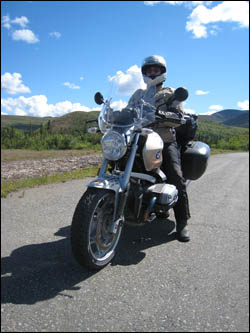 Reflecting on her three decades of living in Alaska, it's important to note, too, that the Volkswagens have given way to BMW motorcycles. Encouraged by her co-workers and learning to ride in UAA's west parking lot, she got her license in 1992. Then, in 1995, when her son was 14, she taught him to ride, and between the two of them they now have six bikes, parked like puzzle pieces in her single car garage (complete with the single car).

She's "Kul Mom" on the online motorcycle network Adventure Rider, earning the handle on numerous occasions from bystanders while riding with her son (not to mention gifting a bike to him for his high school graduation). They road trip together and she even rebuilt her 1976 BMW engine from the crankshaft out. (Yeah, pretty cool.)

Her other hobbies? You know-quilting, baking, knitting-all those other things moms have been known to do.

"I AM UAA: J. Ellen McKay" is licensed under a Creative Commons Attribution-NonCommercial 4.0 International License.