I AM UAA: Judith Owens-Manley 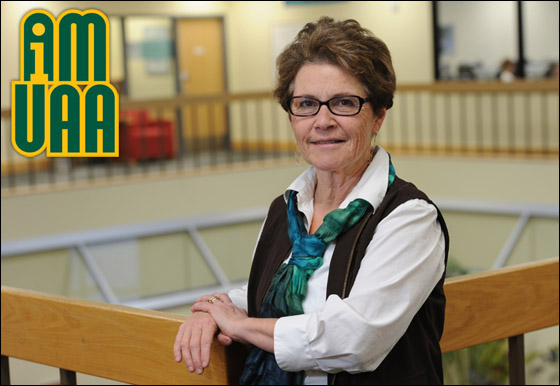 Judith Owens-Manley was a junior at Utica College, majoring in psychology, when she signed up for a class called "The Family." The professor was a social worker, and as he talked about what he did, Judith knew: "That's exactly what I wanted to do; I just didn't know that was what it was called!"

Shortly after earning her bachelor's degree in social work in 1979, she worked for a year in a child guidance clinic and then went right into studying for her master's degree.

"I wanted to be a family therapist," she explains. "And although it was challenging going to school while being a single parent to two children, I knew that's what I wanted to do and I needed to get the education to get there." By 1983, with a master's degree in social work from the University of Albany's School of Social Welfare, Judith was building the foundation to what has become a nearly 30-year career in social work, family therapy, service learning and community engagement.

A little over 10 years in, she went back to school again for her Ph.D. Her two kids? They were in college by then, too. "I really couldn't afford to wait around," she says about finishing her Ph.D. program in three and a half years. "I had to be as efficient as possible."

Her Ph.D dissertation focused on service delivery in public welfare organizations and how workers' attitudes toward clients and the organizational culture affected that delivery. "I was very interested in organizational development, but didn't have a business background," she says. "So I really kept that focus in my study of social work." Since then, she has continued to emphasize long-term partnerships and deepening levels of engagement when she works with community agencies.

In the latter 10 years of her career she was immersed in the refugee population in Utica, which in the early 2000s had the fourth highest density of refugees in the United States. As a member of the board of directors of the Refugee Center of the Mohawk Valley, and three of those years as board president, she really took a special research interest in the local refugee population.

"I had read a book about the Bosnian War called Love Thy Neighbor by Peter Maass," Judith says. "It was really moving and I knew there were Bosnian refugees beginning to be resettled in my community. Specifically, I was trained in trauma work and was horrified that we had just witnessed another holocaust, what a traumatic experience that war had been. So with my expertise in trauma and a colleague's in ethnic conflict, we interviewed more than 100 families in our area and published our own book, Bosnian Refugees in America: New Communities, New Culture with Springer, Inc. in 2006."

During that same time, Judith was associate director for community research at Hamilton College and still in private practice as a family therapist and a consultant for service organizations. In coming to UAA and directing the Center for Community Engagement and Learning, she still considers herself a practitioner, but on a systems level now, rather than an individual or family level.

"Building community-based learning programs is the most engaging and creative work that I've ever accomplished," she wrote in her application to the UAA position. When she saw the job posting, she says, "It just looked like it was written for me."

And now she has been at UAA for a little over a year, engaging students and faculty with the Anchorage community to "connect the dots" between identified issue areas that affect us all. Issues like hunger, economic security, health and mental health, and family and community safety: what are the community's needs and what resources does UAA have among its faculty and students that can address those needs? Judith's job, then, is to help make those connections through faculty mini-grants for community-based projects, Engaged Student Liaisons and the Civic Engagement Certificate program.

"One thing I love about being here is there is great energy at the university and in the community," she says. "I think people are really open, there is a real frontier feeling and a lot of creative energy."

One thing she was nervous about in moving to Alaska with her husband and sailing companion of 15 years was being so far away from family. Between the two of them they have five adult children (one in Vermont, one in Los Angeles and three in the Utica area), and her mother still lives in Utica as well. Though, moving around definitely isn't new to her personally. Born in Delaware, Judith's family moved near Chicago when she was eight, then to Michigan and then to New York. She started her college career in Michigan, then moved to New Jersey and finally to Utica where her family had settled. So how does Alaska measure up?

"Alaska is by far my favorite place to live," she says. "I really just feel like I've finally landed in the place I want to call home."

See what outdoor adventures (lots of cross-country skiing!) the Manley's have been up to since they've moved to Alaska on their blog. And find out more about Judith's work at the Center for Community Engagement and Learning at uaa.alaska.edu/engage.

"I AM UAA: Judith Owens-Manley" is licensed under a Creative Commons Attribution-NonCommercial 4.0 International License.