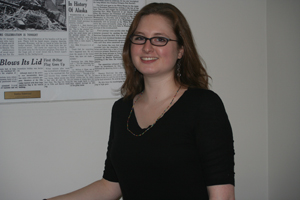 The top five finalists from the Radio Competition were selected from among a record 49 entrants. Aronno and the four other radio finalists will qualify for the National Broadcast News Championship in June 2012 along with television, writing, photojournalism and multimedia finalists.

Aronno's work appeared on the Alaska Public Radio Network last summer. Some of her stories can be downloaded here from alaskapublic.org.

Aronno will receive $2,000 from the Hearst Foundation, and UAA's Department of Journalism and Public Communications will receive a matching grant.

The 2011-2012 broadcast news competitions are held in 106 member colleges and universities of the Association of Schools of Journalism and Mass Communication with accredited undergraduate journalism programs.