I AM UAA: Chris Green

"It's amazing how one small thing can change your life," says Seawolf Volleyball Coach Chris Green. "For me, it was one required half-credit P.E. class while I was earning my associate's degree. At the time I thought those classes were pretty worthless, but if I hadn't taken a volleyball class then, I wouldn't be where I am today." 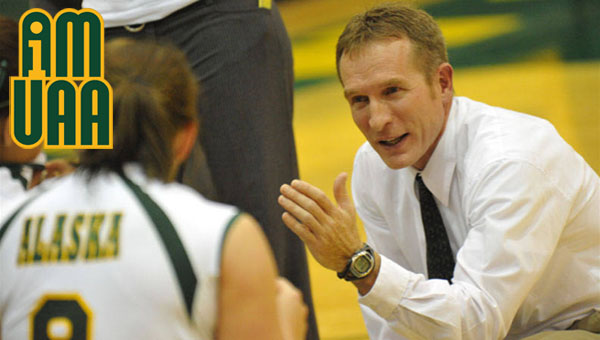 Chris still doesn't know whether his volleyball instructor was being honest or just trying to recruit his sister for the women's competitive team, but at the time, she complimented his skill on the court and suggested that he and his sister compete in the Colorado volleyball tournament circuit. Before the duo knew it, they were competing at the highest level of sand tournaments in the state and winning some very competitive doubles events along the way.

"That's how I was introduced to the sport," he says. "And I quickly decided that I wanted to coach volleyball in the future."

With his associate's degree in general studies in hand by 1987 from Western Nebraska Community College (home of the fateful P.E. class), Chris transferred to the University of Nebraska to pursue a bachelor's degree in math education (and a minor in Spanish that was inspired by a semester abroad in Chile during high school). While playing for the college's men's club volleyball team, he began developing his coaching skills and was the statistician for the Nebraska Huskers women's team, where he learned more about the six-player strategy on the court.

Graduating from the University of Nebraska in 1991, he had an opportunity in his hometown of Gering, Nebraska, to cover for the high school's head volleyball coach during a yearlong sabbatical. As he coached the girls at Gering High School, he also taught math part-time at a small school in the nearby community of Minatare. The next year he moved to Battle Creek High School in eastern Nebraska to coach volleyball and teach math and Spanish.

If ever there was a math-volleyball mold, Chris was cast from it. After two years at Battle Creek and a yearlong master's program at the University of Wyoming for his M.S. in Teaching Mathematics, in 1995 he was plucked up by Kauai High School in Lihue, Hawaii, because they needed that exact combination of skills: a volleyball coach and a math teacher. It was four years, and many beach volleyball games, later that Chris accepted a job at his alma mater back in Nebraska.

"It was a great opportunity for me in many ways," Chris says about returning to Western Nebraska Community College. "It was my home town, my parents still lived there and working at a junior college made good use of my master's degree. I coached volleyball and taught math for nine years there. In 2007 we won the National Championship. And then I applied here."

The transition to UAA was Chris answering the knock of opportunity once again as he jumped into the NCAA level. But even though he has taught math a few times as an adjunct professor, his primary focus here is volleyball. And the dedication shows.

"Coaching here and recruiting here really is a full-time job," he says as he explains what he looks for in his players. "We really try to recruit athletes first, and then develop them into the best volleyball players they can be. Volleyball is a game of height, so we look for jumping ability in addition to general athleticism. Then we work on getting them to be as competitive as they can be."

His techniques certainly seem to work. His first season coaching in 2008 he pulled a team that had won just 17 matches over the previous three seasons up to 15-14 that year. The lady Seawolves then won their first league title in 17 years and made their first playoff appearance in 19 seasons in 2009-accomplishments that earned him NCAA Division II West Region Coach of the Year honors from the American Volleyball Coaches Association and the Great Northwest Athletic Conference Coach of the Year award. This year his team came in second in conference and went to the NCAA tournament for the third year in a row.

"It's great that we were able to change the direction of the volleyball program," he says. "I had a great group of girls my first year here who were willing to accept me and try something different. That's what made the transition easy on me, along with the incredible support from the UAA Athletic Department and the Anchorage community for our sport."

Chris also believes that it's really important for coaches to love where they're at in order to recruit players who will dedicate four years of their lives to being successful student-athletes.

"I love the state of Alaska. I love the outdoors and I love being able to do what I do here at UAA," he says. "We tell our players that it's an adventure and that we will make them the best volleyball players they can be."

Alaska adventure and world-class volleyball players. The only other thing Chris needs in his life right now seems to be mathematics. "Maybe down the road they'll ask me to teach adjunct again and I'll have time to do it," he laughs. "I do miss teaching math." Until then: bump, set, spike. It's a great day to be a Seawolf!

"I AM UAA: Chris Green" is licensed under a Creative Commons Attribution-NonCommercial 4.0 International License.