I AM UAA: Lukas Bouvrie

How does a Boston native go from dog mushing in Alaska to a successful technology start-up in Texas, while getting his aviation degree along the way?

"It's kind of a weird story," admits UAA alum Lukas Bouvrie, as he starts by describing some of his childhood hobbies. 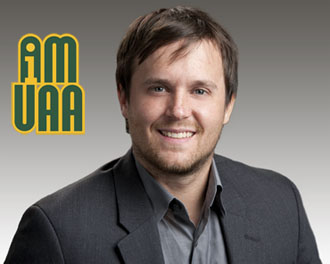 When he was 14, Lukas begged his mother for a puppy. She relented. He chose a Siberian husky. The agreement being that he was sure to give the pup enough exercise. In researching his options, young Lukas settled on dog mushing (of course) and found a club not 15 minutes away from his home in Boston. Before he knew it, he was racing dogs throughout New England, and even spent two summers in high school as a handler for musher and past Iditarod contender Mike Nosko in Wasilla, Alaska.

Couple dog mushing with rock climbing (a natural pairing, and a sport Lukas began at the even younger age of 8), and the tendencies of a mountain guide developed within the young man: adventure, love of the outdoors and a penchant for travel. Right after high school, Lukas chose to pursue his passion for the mountains in the Himalayas and went to work for the trekking company Himalya Sherpa Adventure in Nepal. His visa held out for a year, and he wasn't back in Boston for long before he succumbed to the call of the mountains again.

"The mountains drove my decision to return to Alaska," he says. "Alaska's mountains are the most similar to the Himalayas." Less than a month after returning from Nepal, his truck was packed and he was driving north. It was 2001. He was 20 years old.

What he realized when he got to Alaska and tried pursuing guiding again was that he was really more interested in personal trips in difficult terrain, instead of always repeating the basics with clients.

"I'm not very good at teaching," he admits. "It's a hard skill to learn and I didn't feel like I had the natural ability to explain things well. I really liked climbing in and of itself, just not guiding others."

While living in Girdwood and working at Alyeska he earned residency to qualify for in-state tuition and decided to go back to school.

"Dog mushing, climbing...this was Alaska, why not get into flying," he laughs. "I dreamt of getting my own plane, landing on glaciers, flying myself in to climbs."

He started off in UAA's aviation program for a degree in professional piloting and ended with an emphasis on aviation management to get the business skills, taking one semester off to return to Nepal for a personal mountaineering trip.

As wayward as this all sounds, don't let Lukas fool you. It was through his business management classes and extracurricular entrepreneurship that he found his path, starting with his first company, Reverse Retro, which he describes as an arts management organization.

"I loved Alaska, but felt that it lacked a lot of exposure to art and music from the Lower 48," he says. "We tried to change that with Reverse Retro through connecting with and finding opportunities for visual artists, performance artists, and film screenings. We were a record label for local and Outside artists and we published an arts 'zine."

It was during his time running Reverse Retro ("more of a lifestyle business; it was hard to make money") that his interest in consumer-oriented technology took root. In 2009 he decided it was time to leave Alaska and pursue his master's in business, choosing Carnegie Mellon's M.B.A. program with an emphasis in entrepreneurship, quantitative analysis and information systems.

"I feel that UAA did an excellent job preparing me for business school and the start-up world," he says. "I had some really amazing professors who had a very important impact on me in discovering skills I could put to use entrepreneurially."

Lukas graduated with his M.B.A. in May 2011 and with it co-founded his current technology company, Black Locus. The company sits on the intersection of e-commerce and data, and it mines price points of competitive products for their online retailer customers. They can then make recommendation on pricing adjustments based on that data. What started out as him and two classmates with an idea has grown into a funded company of 15 employees. Through three incubator grants, Lukas and his team got Black Locus off the ground at Carnegie Mellon and have now moved to Austin, Texas, to be closer to their investors.

It's 2011 and Lukas is now 30 years old. He's come a long way in the 10 years since Nepal and the 15 years since dog mushing as a teen. He does still have a rental property in Girdwood. His original Siberian husky, Kenzie, did move to Alaska with him and kept him company through most of his time at UAA. And once Kenzie passed, he got another husky from animal control in Anchorage. Monkey has been by Lukas' side since Alaska, since Carnegie Mellon and now frequents the dog parks of Austin, wondering what cool idea his owner will think up next.

"I AM UAA: Lukas Bouvrie" is licensed under a Creative Commons Attribution-NonCommercial 4.0 International License.