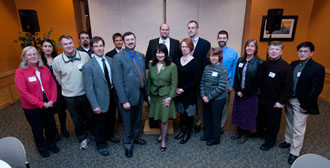 Thirteen research proposals from across the university's seven colleges and schools earned seed money to advance their work. Ideas were wide-ranging, including how Alaska's bog blueberry staves off dementia, to effects of water-borne plastics on the endocrine and immune systems of rainbow trout, to how iqmik, a blend of chewing tobacco and ash from a fungus that grows on birch trees, interacts with oral cells in the mouths of users.

UAA professors Kenrick Mock and Bogdan Hoanca were also inducted as the first members of UAA's "Patent Wall," the new home for plaques identifying UAA researchers who have successfully patented their work.

For a full list of funded proposals and a complete report of the awards ceremony, visit our new INNOVATE blog.