I AM UAA: Kaare Erickson 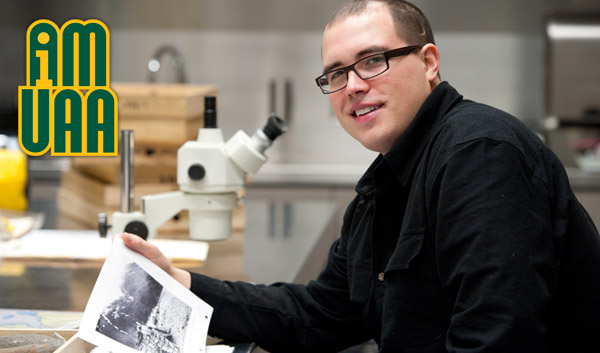 Kaare is pronounced "Kory," not "care" or "Kary" or any other iteration that Kaare has experienced growing up. Aside from the simple consideration of reading his name correctly, we point this out because it is also an insight into part of his heritage-Swedish and Norwegian on his father's side. His name is spelled Kåre in Norwegian, and although the å sounds more like an "o," it was translated to "aa" in English. Part of the Swedish Covenant Church, Kaare's dad was the son of missionaries in Unalakleet.

Kaare's mother was raised in Barrow, but his grandmother was originally from Shishmaref. The Iñupiaq part of his heritage, despite the European roots of his name, is a large part of Kaare's identity, especially as a budding anthropologist.

"Anthropology has taught me a lot about myself and my culture, not only as an Iñupiaq but also more generally as a human," says the 26-year-old. "Hopefully both my experience growing up Native in the village and my education at UAA will help me when dealing with Alaska Native topics and issues in the field."

Growing up, Kaare moved around with his parents and four brothers due to his father's job as a teacher in the Norton Sound region. He spent a few of his younger years in Savoonga, about six years in St. Michaels and went to junior high and high school in Unalakleet. Right out of high school in 2003 he enrolled at the University of Alaska Fairbanks, but it wasn't until 2006 that he really buckled down, declared his major and got serious about school.

"I wasn't clear on what I wanted to do at first," he explains. "I thought I'd come to college just for the experience of being in college. And being a villager, Fairbanks was big enough for me. After a few semesters, though, it finally dawned on me that I was actually here for a degree. I also realized that in graduate school I'd need at least a 3.0 to be considered in most programs. That's when I finally decided on focusing on anthropology and started working on getting better grades."

Even though he had a bit of a stop-and-go start even after transferring from UAF to UAA in 2004, Kaare finally settled into his groove and finished up his undergraduate work with a solid 3.2. Now a graduate student working toward his master's in arctic archaeology, he is excited to finish up and immerse himself in fieldwork.

As a shareholder of the Arctic Slope Regional Corporation (ASRC), Kaare has been able to take advantage of a number of opportunities afforded to him. From college scholarships to seasonal job opportunities on the Slope to a sponsored internship with the Smithsonian Arctic Studies Center at the Anchorage Museum, ASRC has taught him to respect the value of a job and a college education. And since deciding on anthropology as a livelihood, Kaare has sought out field opportunities to learn the trade. 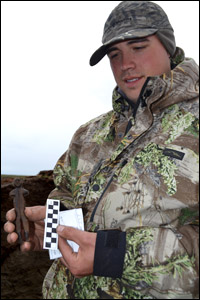 For the past two summers, he has taken part in the excavation of ancient houses buried in sand on beach ridges in the Bering Land Bridge National Preserve at Cape Espenberg. Coincidentally, Kaare's grandmother was born near Cape Espenberg and that was a big motivator for him to get involved in the project. In 2010, he spent 10 days as a beginner learning the ropes with a group funded by the National Science Foundation. Last summer, he spent just over a month at the same site as a graduate student laborer. The dig's most significant find was a cast bronze piece dating back some 1,300 years-the first piece of its kind to ever be found in Alaska around that time period. Among the other artifacts found were wooden materials, arrowheads, harpoon heads, arrow shafts, a plate, dolls, toy bows and oars, fish lures and pendants. The house that he was assigned to help excavate in 2011 was one of the best preserved houses archeologists had ever seen in that area, complete with four standing walls and sleeping benches still intact.

In the summer of 2013, Kaare plans to focus on his own master's thesis research, though he's still undecided on a specific topic. "In terms of anthropology and archaeology, Alaska is a goldmine," he says. "All the diverse Alaska cultures both in the past and in the present allow for so many interesting research ideas. I'm having a heck of a time deciding on a topic for my thesis. The potential is endless."

The father of two daughters, Kaia Rae (4) and Chanel "Teeny Tiny" (1.5), Kaare realizes how precious time is and encourages other students to embrace their dreams and the opportunities that come their way: "Time will fly no matter what-whether you're sitting on your butt or dedicating your time to something. When it's all said and done, you can either still be sitting there, or you can have the experience or a degree to your name. I believe anyone can do anything, you just need to get going and do it!"

After college, Kaare and his wife plan on returning to the village. "I miss living out there," he says. As a shareholder, he got much of his education expenses covered by ASRC, while other entities in the Bering Straits region helped cover cost as well. "I was raised by my people up north, and they paid my way through school. I owe it to them to find ways to use my education to help the region."

"I AM UAA: Kaare Erickson" is licensed under a Creative Commons Attribution-NonCommercial 4.0 International License.