I AM UAA: Marcella Dent

Marcella Dent's major didn't exist when she decided to enroll at UAA. A little unsure of what she wanted to study and enrolling at UAA after her freshman year at Whitman College in Washington, all she knew is that she wanted to be in Alaska. Then, after a Geography 101 course with Professor Dorn Van Dommelen, it all started to click. 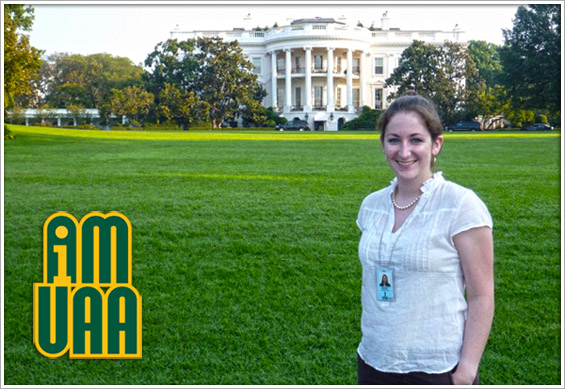 "Dorn told me about a new major he was working on at the time called Environment & Society," she says. "It was a combination of core liberal studies with an emphasis in either science for a B.S. or psychology and policy for a B.A., all with an environmental skew. I was part of the first class of four to graduate with the major, which wasn't officially on the books until fall of my senior year!"

Despite having to wait for the major to become official as she progressed, Marcella found a mentor in Professor Van Dommelen and a passion for community outreach and food security. Earning a Certificate in Civic Engagement from UAA's Center for Community Engagement and Learning (CCEL) along the way, she was also part of a small group of students who started UAA's Heifer International Club, working closely with the national nonprofit to raise money for sustainable agricultural solutions to poverty and hunger around the world.

"Dorn incorporated Heifer International case studies in his Geography 101 class," she says, explaining what initially piqued her interest. "I was inspired by the cases of communities lifting themselves out of poverty through agriculture and food security."

Since starting the club and interacting with the parent organization at a student level, Marcella has seen involvement and activities grow to a level beyond UAA. "We realized that there were a lot of schools and churches in Alaska that have raised money for Heifer in the past, but there is no centralized body here," she says. "Now I'm a part of a project called Heifer In Alaska as an area volunteer coordinator. It's in its baby stages but the goal is to keep a core group of people together to collect statewide information and provide resources for people interested in working with Heifer."

Her philosophy is that now that she is no longer a student engaging with the community, she wants to be a community member engaging with the campus. "Whether it's through Heifer In Alaska or my job at the Consulate of Canada, I want to give back to UAA and the CCEL for the many opportunities I was given," she says.

Consulate of Canada? Yep, this dual citizen has an interest in working at the government-level and just started as a program assistant with Alaska's Canadian Consulate, fresh off an internship from the White House no less.

The White House? That's right. Marcella spent four months last fall working as an intern in the Office of Public Engagement, "the front door of the White House," she says. "I did everything from staple packets for a meeting to help plan briefings the president was going to attend." The office's primary job is to connect with the public, inform them of what the administration is doing and why and, more importantly says Marcella, to gather feedback on what the public wants and needs.

"It was really cool to see government working like that," she says. "The people in our office worked so hard and cared so much about what they were doing. I learned that if you are one of those people who wants to be involved in their community and is doing things at a grassroots level; those are the people the administration wants to talk to. Those are the people who make things happen. It was very rewarding to hear that grassroots efforts do make a difference and that you can effect change with the system, not always going against the system."

No, she didn't get to shake President Obama's hand, though he did talk to the intern group as a whole. Yes, she did meet the First Lady and pet the first family's dog, Bo. But the highlight for her was running into former UAA Chancellor Fran Ulmer in the executive office building of the White House.

"Ms. Ulmer is just so cool-she is an inspiration and a role model," says the fellow Seawolf. "She made time to meet me for tea on one of her trips to D.C. and gave me a lot of kind and helpful guidance."

Still interested in working at a government level coupled with a desire to live and work in Alaska, Marcella thought the Canadian consulate job was a logical next step after the White House. Though her mom, Ronnie Dent, who was director of communications for Alaska Public Telecommunications and station manager of KAKM TV before becoming public relations manager at Municipal Light & Power is American and from Alaska, her dad, Mark Dent, a copy editor at the Anchorage Daily News, is originally from Canada, so Marcella has a special interest in learning about both federal systems.

As Marcella settles into her new gig, she's continuing to work part-time at REI and enjoys seeing many of her high school friends starting to trickle back to Anchorage after attending college Outside. Cross-country skiing has always been a favorite pastime, as are biking and hiking and mostly anything outdoors. She wants to pursue a master's degree someday-maybe in public policy, maybe in food security or environmental science-and is looking at schools in Canada, including the University of British Columbia. Whatever her path might be, though, between her major and her recent internship, she feels prepared to take on anything.

Marcella highly recommends a White House internship experience to other students! Check it out at http://www.whitehouse.gov/about/internships.

"I AM UAA: Marcella Dent" is licensed under a Creative Commons Attribution-NonCommercial 4.0 International License.