I AM UAA: Reality Canty 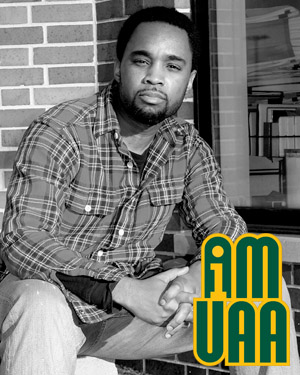 B.A. Psychology '03
Hometown: New York, NY
Fun Fact: Has been collecting and classifying insects as a hobby for three years

Originally from Brooklyn, Reality Canty always did well in school growing up. The drawback was that as a young adult he never quite understood what school was leading to.

"I couldn't appreciate the extent to which an education could inform one's life trajectory," says the now Ph.D. candidate at the University of Illinois in Chicago.

Reality experienced great contrasts in his education. In sixth grade he went to East Midwood Day School, where he says, "I was surrounded by students for whom being smart was cool. The teachers were smart and cool. The students were smart and cool. If you weren't smart and creative, you weren't cool." In contrast, at his predominantly black and Puerto Rican high school, he felt like a minority in his honors and AP classes where his peers were predominantly white.

"Even with all the success I had in high school, I didn't understand what college was for," says the oldest of six siblings. "I thought it was just an extension of high school.

Once out of high school, but still in New York after six years, Reality felt the need to change his environment. An athlete in high school (basketball and cross-country running), he was drawn to being active and in the outdoors. His mother and grandfather lived in Anchorage and Reality spent considerable time with them growing up. Anchorage seemed like a perfect fit.

"When I got there I took the People Mover around town and got off at Providence Hospital. I saw people coming and going along the trails and entering the library across the street. I have always been self-learned, so when I walked into the library and saw all those books, I was hooked; I knew that this was the place for me."

He enrolled in UAA almost immediately. His first major was natural sciences with a biology track, but during his second year he took a few general education requirements in sociology and psychology. That is where a young professor, Claudia Lampman, sparked in him the inspiration he was looking for.

"At that point I was doing well, but I was bored," he says. "I asked the professor, there has to be more to college than getting good grades, right?"

Lampman invited him to join the newly forming Honors College, encouraged him in his writing and supported his interest in summer research opportunities. It was a research internship that was a turning point for Reality.

"I couldn't believe people made a living asking questions and finding meaningful ways to address those questions," he says, describing his first exposure to the process through an engagement with psychological research at UCLA. "That following fall at UAA, I was on fire."

As Reality dove into finishing his degree at UAA, he chose to focus on psychology where he worked under the tutelage of his research mentor, Professor Emeritus Bob Madigan. Another summer research internship at the University of Illinois at Chicago (UIC) in 2001 helped further define his present research path.

The internship was at UIC under his current Ph.D. advisor, Susan Goldman. Instead of playing a role in one of Goldman's projects, though, she supported him in designing his own study. He took his idea back to UAA and won a grant through the Office of Undergraduate Research and Scholarship. The grant enabled his first foray into investigating the role of mental representations and cognitive processes in domain-specific activities. More specifically, his current research examines the cognitive mechanisms that underlie problem-solving and reasoning in math and science.

"When I was in high school," he explains, "I didn't have a lot of mentors for math and science around me. There was a group of guys who would have these profound conversations about math and science and how they related to their lives, but I'd see them either drop out of school or not do anything related after graduation. The kids in my community didn't seem attracted to those fields, and I wanted to know why not. I hope that my work and presence will help to change that reality."

Reality has taken this field of inquiry and applied it to both his master's and Ph.D. degrees at UIC, reconnecting with Goldman and collaborating with people across many disciplines. His research lab, 4Ms (pronounced forms), examines how mind, matter and motion interact in the domain of mathematics.

Part cognitive study and part community outreach, Reality's research motivates him to inspire young people to pursue math and science. After defending his doctoral thesis this semester, he will continue his cognitive research and also work on issues of access and equity with Chicago schools that serve students of underrepresented backgrounds to help spark their interests in the fields of math and science.

This sense of outreach, too, has been with him since he was at UAA. He was president and vice president of the Psychology Club at different times and was a volunteer on the Minority Education Concerns Committee with the Anchorage School District. Now, at UIC, he is on the Chancellor's Committee, speaks at high schools and supports students who travel from different universities to UIC for the summer to participate in the same type of research experiences that helped turned him on to the wonders of academic life.

"I fell in love with UAA," says Reality, now a father of three and engaged to be married to an information scientist, also on her way to a Ph.D. "I'm really proud of my education and experience there. There was such a family vibe that instilled in me a sense of pride about the school. Someday I want to come back to the family and say 'look what I've done.'"

"I AM UAA: Reality Canty" is licensed under a Creative Commons Attribution-NonCommercial 4.0 International License.