John Aho and JoAnne Baker have been married for almost 30 years. And over those decades together, they have watched UAA grow from a fledging community-turned-university campus to an impressive array of programs and scholarship. 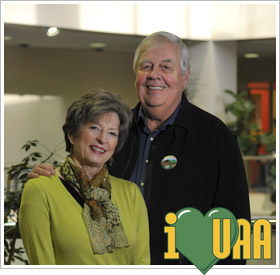 "It's really interesting to see how UAA has progressed over the years in the various academic areas," says John, who was born and raised in Anchorage as a third-generation Alaskan. "It's definitely not a backwoods institution anymore!"

Aside from the occasional basketball game or guest lecture gig, John's involvement at UAA really took shape in the early 2000s when he was asked to put together an advisory board for the School of Engineering. With his background in aeronautical, astronautical and earthquake engineering and working as a principal project manager and vice president at CH2MHill, John seized the opportunity to help support the future of engineering in Alaska.

"It's been great to see how successful the advisory board has been in supporting the engineering program," says the 2006 honorary doctor of sciences. "UAA needs to continue growing and improving so we can recruit and retain Alaskan students in all areas. There is a continuing need for not only engineers, but for health professionals and business professionals in this state."

JoAnne moved to Alaska from Seattle in 1981 as an administrative manager with CH2MHill. Though she took a few continuing education courses at UAA when she first transferred to her new work location, these days she is continually impressed by the opportunities on campus.

She really got involved with supporting UAA after being invited to a debate event. "I was really impressed by what those students could do," she says, "by what they had to learn to debate and, of course, their coaches. The whole process amazes me, as well as their standing in the world ranks."

Finding what interests them and supporting those programs (pottery is on their list as well) is how John and JoAnne remain engaged in the UAA community. Could there be a more compelling reason why this College of Fellows couple loves UAA? Yes: "The transformation of our daughter, Jessica," says John. "Seeing her change from her sophomore year to her junior and senior years really opened my eyes to the importance of UAA. She was really impressed by her professors and the courses in her business major."

"I just want UAA to become more visible," says JoAnne. "People should be aware of the extraordinary things that the university is doing."