Chemistry, physics and engineering. A marriage of minds at UAA could lead to new and unusual complex structures that could one day become nanotechnology that improves people's lives.

"Imagine taking a seed, throwing it in a Jacuzzi, and growing your own T.V.!" says chemistry professor Jerzy Maselko.

As sci-fi as that sounds, Maselko and Kiehl along with a team of three other UAA students, UAA physics professor James Pantaleone and cohorts in Poland are at the beginning stages of studying how complex structures in nature grow in hopes to someday control that growth and develop new biotechnologies from inorganic compounds. Maselko and Pantaleone are working as a team under a $270K three-year grant from the National Science Foundation to study "the formation of complex precipitation structures." Maselko explains it as growth technology versus assembled technology. That is, wouldn't it be easier to grow useful things from a seed like Mother Nature does, rather than try to assemble things from various unrelated materials? 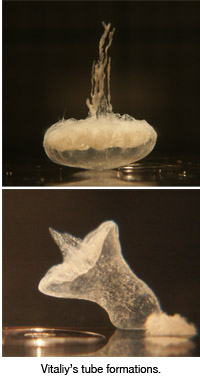 Vitaliy and his tube formations

"We are using chemistry we don't understand to learn about physics we don't understand," says student Vitaliy Kaminker, an undergraduate student in physics at UAA. From Russia originally, he moved to the U.S. in 1996 and earned his first bachelor's degree in aerospace engineering while living in San Diego. He and his wife moved to Alaska in 2010, where he is checking off the prerequisites he needs to get into graduate school.

Working closely with Dr. Pantaleone, Kaminker chose to study the reactions of calcium chloride in silicate solution. As Kaminker adds a drop of calcium chloride to the silicate, it acts much like a drop of ink in water, but in this case the droplet freezes and then "grows skin," that is, an elastic membrane forms around the droplet shortly after entering the solution.

Some of what Kaminker sees next is closed tube growth (similar to yeast budding) where pressure builds up in the membrane, cracks open, the calcium chloride bubbles out creating another bubble with a membrane, the pressure builds up and so on. The second type of growth he sees is open tube growth where the solution rushes out of the cracked membrane, precipitates along its outer edge and starts growing like a tree.

Kaminker is particularly interested in what triggers certain structures to grow. In his studies, he has noticed that he can get consistent shapes over a number of trials when the calcium chloride is dropped from a consistent height. Change that distance and the resulting structures change. He's also measuring how fast the original membrane creates itself once the calcium chloride hits the silicate solution, doing so with a high-speed camera borrowed from the engineering department. Other contributing factors to the outcomes are the diameter of the calcium chloride droplet and varying the concentrations of calcium and silicate. Overall, his intentions are to study how initial control variables influence the evolution of the membrane formation.

Micah and his bobbers

Micah Kiehl (who thinks we will grow whole buildings someday) has his bachelor's degree in physics and a master's in education and was once a high school science teacher. While trying to get into UAA's WWAMI School of Medicine, he's playing around with chemicals in Maselko's lab.

(As Kiehl describes what happens next, this sudden chemical find seems somehow beside the point. Just another day at the lab?)

His garden grows thusly: The pellet, upon hitting the solution and sinking to the bottom of his flask, starts to bubble carbon dioxide and starts forming its gel coating (made up in part of the heretofore unknown aluminum carbonate). The bubbles change the buoyancy of the pellet causing it to rise back to the surface of the solution, where-it starts growing.

At one point, one of the stalactites breaks, a piece falling to the bottom. More bubbles. The piece rises part way back to the surface. Then turns itself around mid-solution and falls. Then rises again before reaching the base of the flask. And finally falls one more time before coming to rest at the bottom. 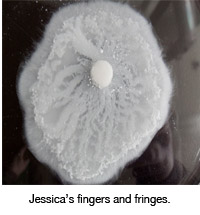 Jessica and her fringes and rings

Chemistry major Jessica Jaroma has been helping Dr. Maselko with his chemical garden research for three semesters as an undergraduate student in his inorganic chemistry classes. Her experimental trials consisted of pellets of calcium nitrate placed in differing concentrations of sodium carbonate. To start, there was a distinct difference in size of reaction depending on the solution's amount of sodium carbonate-the lower the concentration, the larger the growth from the pellet. Once she noted that and tried ever decreasing amounts of sodium carbonate, she also noticed that the outer part of the reaction would grow a fringe. The longer the two chemicals reacted, the clearer the fingers of the fringe would become and after about 24 hours or so it would produce multiple rings of fringe as well.

Chemical gardens to Poland and back 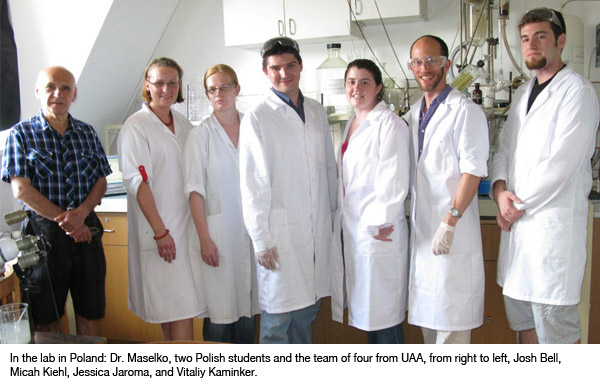 Dr. Jerzy Maselko is a native of Poland but has been at UAA for over 20 years. Upon receiving the grant from the National Science Foundation last year, he was keen on taking a group of his students to his native country to share their research with fellow scientists (professors Piotr Nowak and Czeslaw Mora and students Agnieszka Krol-Gracz, Agnieszka Dionizy and Ewa Michalak) at the Institute of Physical Chemistry, Technical University of Technology, in Wroclaw. Kaminker, Kiehl and Jaroma, along with former UAA student Josh Bell (who is now at a university in Arizona), spent a month in June and July last summer trying to recreate their experiments and discovering new ones.

The group is currently working on publishing their recent results, and Dr. Maselko plans to travel back to Poland this summer and next with another group of students. Altogether, Maselko and Pantaleone have published nine papers with 22 undergraduate students, which is a great achievement recognized on the national level. Their goal in undergraduate research is to provide opportunities for students to execute quality research for publishing in peer-reviewed journals, such as the Journal of Physical Chemistry and Physics Review E. Such opportunities are a boon for students that have their sights set on medical school or graduate school in either chemistry or physics.