Maria Williams is happy to be settling back at home. Recently appointed director of the Alaska Native Studies Program in conjunction with a faculty position in the Department of Music, she moved back to Anchorage last June, thrilled to be joining UAA. 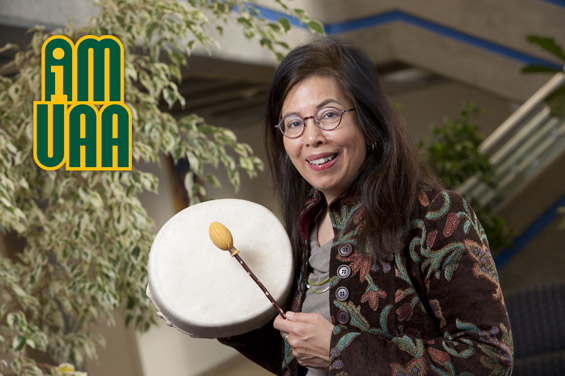 Granted, she's been SPOILED ("all capital letters for emphasis," she says) to have spent the last 13 years in New Mexico during the winters and Alaska during the summers, but this ethnomusicologist is excited to be back in her home state for good, focusing on Alaska Native education, music and culture.

"My main area of research has always been Alaska," says the Tlingit Native, "but I've had the great fortune of wonderful experiences in New Mexico where I learned so much of the big picture of indigenous people and communities in America. Those commonalities, and the distinctions I can make, are the things I can apply here as I try to move the Alaska Native Studies Program forward and teach indigenous music."

Maria studied classical music as an undergraduate at the Dominican College of San Rafael in California. A violist by training, she grew up loving all kinds of music, indigenous and Western alike, but never knew of any music programs in higher education that addressed Alaska Native music specifically. After graduating with her bachelor's in 1981-and returning to Alaska to work a couple of years for her regional corporation, Cook Inlet Region Incorporated, and teach private music lessons-she found out about a program at UCLA in ethnomusicology and it instantly resonated with her.

"Ethnomusicology is a sister field of anthropology," Maria says. "It focuses on non-Western, non-European classical art music." So she buckled down and earned her master's in 1989 and Ph.D. in 1996, both with specializations in the ethnomusicology of Alaska Natives. And in between her stints of education, she found herself back in Alaska, playing viola for the Anchorage Symphony. The best of both worlds.

While working on her doctorate, Maria taught for a couple of years at The Institute of American Indian Arts in Santa Fe, her first exposure to New Mexico. Later, despite trying to land a teaching position in the University of Alaska system, she applied for a job in 1999 with the University of New Mexico (UNM) in Albuquerque that was a joint position in Native American Studies and music, and she later became the associate director of The Arts of the Americas Institute.

"I had a lot of wonderful experiences in New Mexico," she says. "I got to do some community collaborative work with the many different tribal communities there and they have many of the same issues as Alaska Natives have up here. It was so fun to be working on things I believed in."

She says one of the notable differences between the UNM and UAA is the longer history of indigenous programming and the larger Native faculty at UNM, "just because they've been doing this a lot longer than we have."

"I would say that UAA is at the cusp of really strengthening some fantastic programs," she continues, listing art, engineering and nursing as disciplines with established support for Native students. "Right now I'm meeting with the affiliated Native faculty (about 12-15 professors) to get recommendations for the direction of the Alaska Native Studies Program. I want to work in partnership with my colleagues and draw from their huge strengths and great ideas."

Maria's vision is eventually creating a collaborative Bachelor of Arts degree that allows a students to specialize in Alaska Natives Studies in conjunction with whatever other degree program they are concurrently pursuing, something more than the minor that the program currently offers. She also wants to develop the model so that it recruits students as cohorts that "enforce each other on their academic journey."

She has great vision for the program. And in the meantime, 50 percent of her time is split with the Department of Music, teaching Alaska Native Music and World Music. And although she focuses primarily on indigenous music in both of her classes, she personally gets to immerse herself in the Western orchestra tradition again playing viola for a local group called Society of Strings.

"The viola and violin are the world's most universal instruments," she says, describing an array of styles she has been exposed to over the years: mariachi, Arabic Music Orchestra, American folk music, West African music. "I grew up with an extraordinarily diverse music scene."

"I'm thrilled to be back in the music department," she continues. "There is so much energy in the faculty there. And UAA students have been fantastic; they're very curious, very hardworking and very diverse. But the best thing about being back-it's home."

"I AM UAA: Maria Shaa Tlaa Williams" is licensed under a Creative Commons Attribution-NonCommercial 4.0 International License.