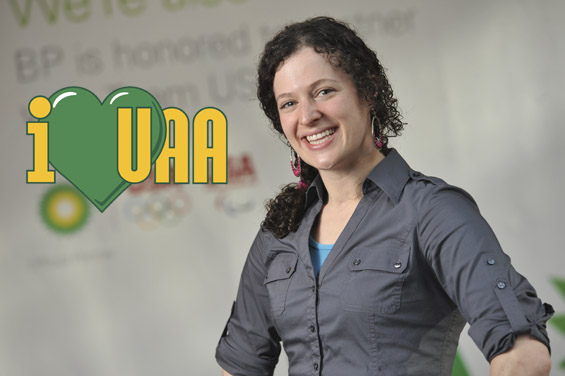 UAA has a Campus Champion (capital Cs courtesy of BP) in engineer Jenny Jemison, a UAA School of Engineering (SOE) alum and the youngest member of its advisory board. In addition to working as a reservoir engineer on BP Alaska's Milne Kuparuk reservoir, Jenny is tasked with shaping future generations of Alaska engineers by supporting local college students through scholarship programs and student club sponsorships.

As UAA's Campus Champion, Jenny lobbied BP Alaska to award $12K in scholarship dollars to SOE students in 2010. In 2011, she helped expand the program to include students from UAA's College of Business and Public Policy, the project management program and the construction management program. It's been such a success, BP has pledged to continue awarding the scholarships annually. Jenny is also the woman behind BP's title sponsorship of the American Society of Civil Engineers (ASCE) Pacific Northwest conference at UAA last year where some of the 50-member student chapter of ASCE had the chance to compete in the steel bridge competition. On having UAA advocacy as part of her job description, Jenny says, "It's so rewarding. I love being able to have that face-time with students at UAA."

Jenny also knows first-hand that energizing future generations of UAA grads starts before they even think about submitting an application for admission. That's where her mentorship activities with Anchorage School District's Gifted Mentorship Program students come in. A product of the program herself, she's excited to be on the other side of the partnership now and has had a chance to act as mentor while working for BP.

Last year, she mentored South Anchorage High School student Jordan Batac and connected her with ANSEP. "She did [the junior academy] program last summer and then she got to do this kick-start program with them where she took Calculus II and III-she's a senior in high school-Calc II and III at the university!" Jenny says. "Next summer she'll be in their summer bridge program and then be an intern, possibly at BP." And the best part? "She's planning to go to UAA!"

As a UAA alum who loved her own experience, she's pleased to note a sea change in how UAA is viewed by local middle and high school students. The Society of Petroleum Engineers, of which Jenny is a member, sponsors a student tour event where they take a group of high school juniors and seniors on a tour of H2Oasis and then the SOE at UAA. "The first year I did it we had about 60 students and maybe 10 of the 60 wanted to be engineers and none of them planned to stay in Anchorage and attend UAA," Jenny says. This year, when they did a poll of their 120 participants from public and private schools across Anchorage, "probably 80 percent wanted to be engineers and half of them wanted to stay in Alaska for school at UAA or UAF, which was really awesome."

Beyond going to college in Alaska, many UAA and UAF grads are getting snapped up by Alaska employers in growth industries. "I always tell students, 'you can be a big fish in a small sea up here.' The companies here are starving for engineers and scientists and teachers, so there's a lot of opportunity for growth in your career." Jenny mentions that BP Alaska employs something like 100 UAA and UAF alums and 38 percent of their new hires are from the UAs or Alaska residents. "Everyone just wants to see Alaskans here!"