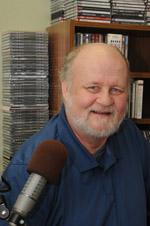 Rick Goodfellow, who founded Anchorage's classical radio station KLEF 24 years ago, insists he isn't truly an entrepreneur. He started the station, he says, "because I liked the idea of doing something people said couldn't be done." Just last year he launched The Ghost Tours of Anchorage and has been busy leading folks on walking tours of the downtown area regaling them with city history and ghost lore. While he may not actually see ghosts himself, he does see opportunity everywhere in Anchorage, particularly at UAA, which he refers to as "an unsung, quality university."

Rick became part of UAA's College of Arts and Sciences (CAS) Advisory Board after actively seeking a way to become involved at the school. He was motivated by the outstanding journalism and public communications grads he kept running into who were, he says, "as good or better than master's students from famous universities." He called and asked how he could help and was selected as an advisory board member just over a year ago. "It's the first time in a long time I've been excited about something," he says.

This past spring, Rick was pleased to take part in the selection process for the new dean of CAS. Of Dean John Stalvey, who starts in July, Rick says, "He's first rate. He's a science guy who really values the liberal arts." What most impressed him about the incoming dean? "He actually spends about twice as much time listening as he does talking. I think he'll be fabulous."

In addition to his post on the CAS Advisory Board, Rick has been asked to serve on the Journalism and Public Communication Advisory Board. "People should do these things for selfish reasons -- you get so much out of it," he says. "I've met people much smarter than I am, therefore I became a little bit smarter."

Rick's involvement with UAA actually goes back much farther than his recent advisory board memberships. Both of his parents were alums. They attended college at home in Anchorage while he was completing high school and later went Outside for college. "I had this secret that I would never tell: that they were working much harder in their classes than I was in mine at a much more expensive school."

Since his parents' experience with public administration studies at UAA, the quality of the education available to students at the university has continued to impress Rick. "The academic offices have tended to the knitting and built quality programs," he says.

"I think UAA is underappreciated. Its reputation lags," Rick says. "But perception trails reality." The reality of what's happening at UAA hasn't yet permeated the community. "You don't field the #2 debate team in the whole nation by accident. What goes on at UAA is very impressive indeed."

As part of an advisory board whose members have all pledged their financial support of the university, Rick hopes his fellow Anchorageites take note and seize the opportunity to lend support and expertise to their hometown university.