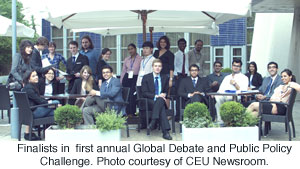 When Emily (Emi) Barker heard through Professor Steve Johnson, director of the UAA Seawolf Debate program, of an opportunity to bring together her love of public policy with a chance at international travel, she seized the occasion. Global Debate and Public Policy Challenge (GDPPC) is a scholarship competition hosted by the International Debate Education Association in Budapest, Hungary. The challenge was open to all undergraduate students from universities all around the world. In order to apply, participants were required to write a policy brief on the topic "Securing Liberty" that was to address the balance between personal liberties and national security.

For the competition, Emi wrote a brief titled "Open Your Mind: The call to counter unnecessary student restrictions" about international students and the student visa application process. Her brief caught the attention of the qualifying judges and Emi was accepted as a finalist in the GDPPC competition. Emi became one of the 24 accepted international finalists to win the all-expenses-paid trip to Budapest, Hungary. Among the participants, Emi was not only able to represent the University of Alaska Anchorage, but she was also one of only six Americans selected for the trip. The remaining field was made up of representatives from over 12 different countries.

The challenge and forum took place June 10-17, during which Emi participated in further competitive rounds involving the presentation of the policy she had written. While there, she also attended multiple lectures and workshops at Central European University giving insight into a global perspective on policy making. Emi met with international policy makers and global think-tank representatives. She received an honorary place as a part of the first group of finalists for this annual competition. This occasion was both educational and enlightening to both culture and political processes for its participants. Emi was honored by this opportunity and proud to represent UAA on the international stage for this event.

To learn more about the challenge, visit the GDPPC website. For more information on UAA's debate team (including upcoming events and how to join), visit the Seawolf Debate website.