Academics don't stop in summertime at UAA, but they morph in some interesting ways. ANSEP is a good example. 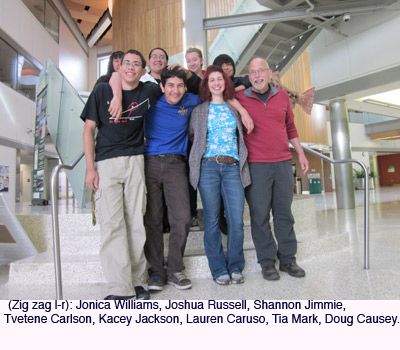 Some of this academic cultivation takes place when the UAA campus is less busy in summer. Specifically, ANSEP's  "Acceleration Academy" for high school students lasts six weeks, from late May through June. Students come from all over the state to live in dorms and take two college classes a day-science in the morning and math in the afternoon. Evenings are for serious group study sessions and team building activities. Saturdays feature group social activities, Sundays are for more personal time, with studying resuming again in the evening.

"Summer school on steroids," is how Mike Nabers (UAA B.S. Civil Engineering 2005), a regional director for ANSEP, describes the program in a video on the ANSEP website. Also speaking on the video for ExxonMobil, the founding partner for the component, Dale Pittman said ANSEP is having an enormous impact on "raising the bar for math and science education, graduating students who rank in the top percentages across the nation of high school students with college credit."

To get a feel for the summer ANSEP student experience, we dropped into a morning science class, Introductory Biology, offered for the first time this summer to ANSEP students.

The class was small, just four young women and two young men. They hailed from as close as Palmer to as far away as Napaskiak in western Alaska. UAA graduate student Lauren Caruso and Biological Sciences Professor Doug Causey taught the class together.

Almost immediately, the two sensed that a traditional lecture format could lose students. Besides, if this were to be a college-level biology class, the students wouldn't just sit and listen to a lecture for several hours. They'd do hands-on learning. So Caruso and Causey worked hard to incorporate some field exposure that paralleled the subjects they were covering. 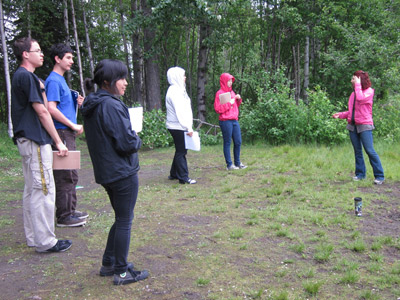 Students and teachers were near the end of their six weeks together; earlier, Caruso and Causey had lectured on the interconnectedness of ecosystems and biomes. On this, their last day of class, students scattered to tables and stools in the airy ConocoPhillips Integrated Science Building (CPISB) atrium to take a quiz on their reading. Then they headed with their instructors out the door to the trail that leads to Goose Lake.

It was a cool, overcast day. Little wind meant lots of bugs among the trees and shrubs around Goose Lake. Before long, students were pulling up hoods on their sweatshirts, covering their hands with long sleeves and swatting bugs right and left.

The group walked to a little grass clearing near the lake and Caruso delivered their field assignment. She began by asking them to look closely at the environment and catalog what they saw-elements of the lake, the grass, and the various tree and plant species.

About then they spotted the ducks-a mom and some babies. The mama waddled right up on the grassy bank within a few feet of the class. After a quick inspection, her curiosity seemed satisfied and she returned to the lake and led her young away -- all but one straggler who seemed to have his own agenda.  Briefly, students and teachers were charmed by the little wanderer. 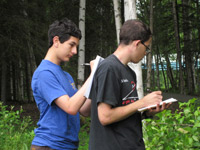 Meanwhile, the class carried on. Students dispersed into the woods, recording in their notebooks the living things they could take stock of. They asked questions -- What's this plant? What kind of a bug is that? When Caruso and Causey didn't know, they didn't guess. Instead, they took a sample, hoping to identify it further in the lab.

After about 20 minutes, the students headed back to campus. Perched on stools at long tables, Caruso quizzed them on what they had seen and how it fit into the concepts of ecosystem and biome. Then, she asked them to take their field notes and illustrate a food web, showing the relationship among the various lakeside plant, insect and animal residents.

They bent their heads to the task. Caruso busied herself finding some rubbing alcohol for the students to quell the itchiness on those annoying mosquito bites. Then, one by one, they showed their hand-drawn webs and described the primary, secondary and tertiary dependencies.

With just a few minutes left before their lunch break, Caruso invited students to evaluate their biology class experience.

"It's hard work," offered Joshua Russell, a home-schooled student from Palmer. "But you really learn a lot." 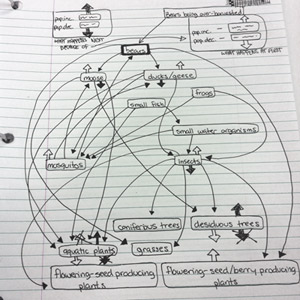 Tia Mark, a Willow resident who goes to high school at Su Valley, said she really liked "being a part of intelligent conversation among people who have drive. I like giving my opinion," she said, "and not being passed over."

Napaskiak student Jonica Williams was quiet and thoughtful. She'd climbed a few mountains to get into ANSEP, literally having to move from her village to Bethel so she could take the required courses necessary to step in to BIOL 102.

No, she wasn't sure of her college or career path, she said. A senior in high school, she was only sure that her life work would be supportive.

Whatever I do, she said, "I just want to help."

She headed for lunch and an afternoon of math, knowing that within a handful of days, she'd be returning home to western Alaska and her last year of high school, enriched by her ANSEP summer experience.

For her part, Caruso found the teaching experience enriching.

"The most defining moments were when a student raised his or her hand to ask a question for the first time ... watching their inquisitive minds take shape was remarkably fulfilling for someone like myself who is so passionate about science education."

"August 2012: A peek into BIOL 102 for summer ANSEP students" is licensed under a Creative Commons Attribution-NonCommercial 4.0 International License.