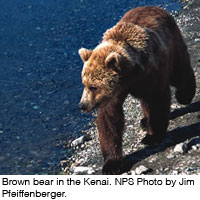 The Biological Sciences Department is pleased to have Becky Sawyer, graduate student in biological sciences, defending her thesis. Her thesis is titled "Major histocompatibility genotype does not predict levels of blood parasitism in two species of bears in Southcentral Alaska."

Recent studies of free-ranging vertebrate populations have shown that identity and intensity of parasitism are correlated to the genotype of the host at the major histocompatibility complex (MHC), a genomic region involved in the adaptive immune response of vertebrates. However, there is no consensus on the specific mechanisms of selection by which MHC alleles interact with parasites. We investigated MHC diversity, microsatellite heterozygosity and associated levels of parasitism in brown bears (Ursus arctos) from the Kenai Peninsula and black bears (U. americanus) from the Municipality of Anchorage sampled between May 2009 and October 2010.

We genotyped black bears at the DQB locus and brown bears at the DQB and DRB loci of the MHC. In addition, we developed polymerase chain reaction (PCR) based protocols for amplifying the 18S rRNA gene of common protozoan parasites that shed intermediate stages into the circulatory system of their hosts. We used generalized linear models to assess the relationships among MHC genotype, heterozygosity and parasitism. PCR revealed Eimeria spp. infections in brown bears, which is consistent with previous reports of infection. However, we were surprised to detect Trypanosoma cruzi in both bear species since this parasite has not been reported as far north as Alaska.

Importantly, we found no significant associations among MHC genotypes, heterozygosity, intensity of infection and parasitism. Our results indicate that DRB and DQB genotypes alone do not predict levels of parasitism, suggesting that other loci or even non-genetic factors, such as geographic location and age of host, may be important in predicting infection status.

Note: Parking is free during the summer-intersession. Due to current construction in the library lot, please park in the garage behind the ConocoPhillips Integrated Science Building. Please call the department at (907) 786-4607 for further assistance.

"Thesis Defense by Becky Sawyer on levels of blood parasitism in two species of Alaska bears - Aug. 9, 2012" is licensed under a Creative Commons Attribution-NonCommercial 4.0 International License.