That formula is well known at UAA, with an Office of Undergraduate Research and Scholarship housed within the University Honors College devoted to fostering undergraduate research.

Another big opportunity for college undergrads across the United States is called Research Experiences for Undergraduates (REU), organized and funded through the National Science Foundation. UAA has been an REU site since 2007, so far serving 50 undergrads, 10 of them from UAA. Participation of UAA students in this program has been made possible in part by donor funding provided by UAA's Office of Undergraduate Research and Scholarship.

This summer, the Department of Biological Sciences placed 11 REU undergrads in research opportunities at UAA that focused on ecology and physiological ecology. Eight students traveled to Alaska from around the U.S.; three others were selected from UAA.

The REU program is a pretty sweet deal for students. They receive a stipend, food allowance, on-campus housing and round-trip airfare to Anchorage if they are from out of state.

More than 300 undergrads from across the country applied to UAA's REU site this year.  That high volume makes UAA one of the most sought after biology REU programs in the country.

Let's find out by meeting three of the 2012 REU students. They just finished up their 10-week program with a research symposium Aug. 3, where they presented their findings and posters.

Allison Zimont: On the hunt for 'extremophiles' on the Matanuska Glacier 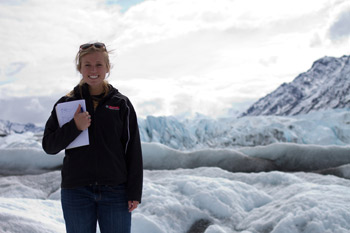 Allison Zimont came all the way from home in Michigan and her university in Milwaukee to work with Fred Rainey. Her job was to collect water and sediment samples from the Matanuska Glacier and isolate tiny bacteria present in the samples.

"[Professor Rainey] is a master at prokaryotic taxonomy," Allison said, meaning very small bacteria lacking a cell nucleus. "He finds some that no one else has seen before, and then runs tests on them to see how big they grow, what they grow on, what they make, what they like.

"Two years ago, a bunch were found in Antarctica in the Victoria Upper Glacier. The conditions are similar here." So she set out to see if she could find any.

On a day trip to Matanuska Glacier, she collected enough samples to study for the next 10 weeks. She plated them up and grew colonies, continually isolating them until she had a uniform plate of a single species.

Allison's work was successful. She is happy to report that she plated 85 isolates, 18 of which were Hymenobacter. Within that genus, she identified three species: antarcticus, glaciei and soli. These she tested for pH, tolerance to sodium chloride, temperature and UV resistance.

Bugs like these are known as "extremophiles," meaning they can survive extreme cold and exposure to DNA-modifying UV rays, conditions that life forms on Earth have less tolerance for. Astrobiologists follow these developments in their pursuit of the origins, evolution and distribution of extraterrestrial life.

Allison had worked in a lab at the Medical College of Wisconsin, but already sees differences in what she did in Rainey's lab. There, she said, her job involved looking for something very specific each time.

"The work here has much more a feel of exploration for the sake of exploration," she said, explaining a passion to know as much about an organism as you can. And even though she had to work down a checklist of characteristics on her extremophiles, she never found it monotonous because it was a list to identify something no one else had ever seen before.

Allison's major at the Milwaukee School of Engineering is bio-molecular engineering-basically, how the body, or a cell, does what it does. 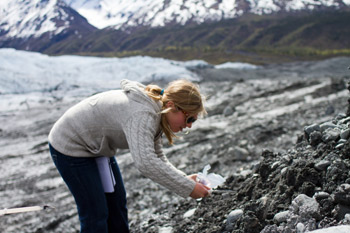 Stem cell research is a hot topic among her peers. Her future could contain work in pharmaceutical drug development or agriculture with genetically modified organisms. Her own particular passion is energy, and the study of algae as a source.

Interestingly enough, Allison found Alaska before Alaska found Allison. She was determined to get here this summer and started with a long list of resorts where she was willing to wash dishes or herd tourists. But in her search for work, she included REU applications and was extremely pleased to find a spot at UAA.

Living frugally on her food stipend, she socked away enough money to pay for a little Alaska travel-Seward, Girdwood and Denali. Basically, a fantastic Alaska summer and a great science job, to boot.

Would she recommend UAA's program to another student?

"Absolutely," she said. "I'd do it again next year if I was given that opportunity."

Arctic ground squirrels successfully fatten up for winter in the short time span of just three weeks. They can go from five percent body fat to 45 percent body fat. That makes them very interesting to scientists trying to unlock clues to human obesity.

Professor Khrys Duddleston's UAA lab is heavily focused on understanding how squirrels manage to fatten up so quickly. To that end, she gave Devinn a project looking at arctic squirrel fecal samples under two different circumstances.

One research thread involved testing for effects when the diet of adult arctic ground squirrels changed from wild forage to lab food. Devinn took fecal samples when the squirrels were just captured and again seven weeks later after they had been on "captive rodent chow."

Her other research tested for microbial disruption in the gastrointestinal tract after antibiotics were introduced to one group of juvenile squirrels but not another. 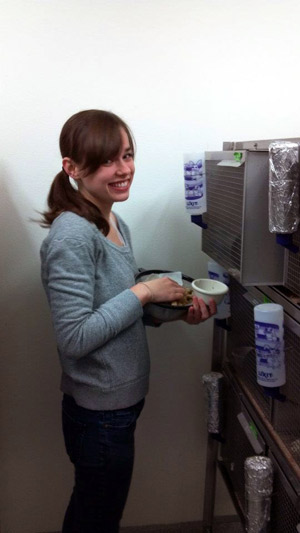 Results? While she only had two test points for each aspect of the project, she noticed that the gut microbes of the lab-fed squirrels were much more diverse than those of the wild-fed squirrels. For the antibiotic test using ampicillin and neomycin, she found that the gut microbes of her control (non-antibiotic) group and her antibiotic group had both changed, but in different ways.

"A lot of problems associated with gastrointestinal disease have a relationship with the relative abundance of gut microbes," Devinn said. "Once we get a better understanding of how certain things affect gut microbes-how diet or antibiotics might affect them-we may be able to see how these changes influence the relative abundance of microbes associated with disease."

A senior at Ohio Wesleyan and hailing from Washington D.C., Devinn got her first real research experience this summer. She's already preparing her veterinary school applications for fall of 2013, and her UAA experience offered a new insight into her potential future career.

To ensure the health of test animals, UAA contracts with a local independent veterinarian to monitor the status of animals in its research programs. Devinn liked the idea of perhaps getting to practice veterinary medicine by day but still be able to be involved in research in a university setting.

Devinn was also part of the "squirrel care team," meaning she spent time moving squirrels and scrubbing cages. None of it-not the fecal samples, not the cage scrubbing-bother her one bit.

While saying she loves animal "poop" might be stretching it, she's very clear about the wealth and volume of health information that scat contains.

"I think the G.I. tract can tell you just about anything you need to know!" she said.

Devinn said she found her living situation at UAA spacious compared to the dorm life she was expecting, and thoroughly enjoyed the chance to see Denali National Park as well as the Exit Glacier and Alaska SeaLife Center in Seward.

This summer's REU opportunity for UAA student Brady Salli will tap background in circadian rhythms that he already developed through a 2010 research project on migrating songbirds. That work was made possible through research funding he was awarded by UAA's Office of Undergraduate Research and Scholarship.

In that research project for Professor Loren Buck, Brady was working to understand how these songbirds manage to meet, mate and fledge their young under the Arctic's extreme summertime light conditions. From the time they arrive, the birds literally have six weeks to procreate and depart. How do they manage to stay on an effective and successful tight schedule, despite the 24 hours of sunlight in the Arctic?

Through field observation, Brady and others were able to detect that the songbirds maintained their schedules-sleeping by night even in the Arctic light and rising at "dawn" to eat, meet and mate. So far, they've determined that the songbirds can detect subtle changes in light; their testosterone levels, which increase during mating season, make them even more sensitive to variations in light.

Now, through Professor Buck's lab, Brady will extend his exploration of circadian rhythm to arctic ground squirrels. Does their daily descent into a dark den help them manage their light sensitivity and maintain circadian rhythms?

Brady, 30, is a nontraditional student, turning to higher education after a military career that also netted him a GED. As a teen, he said he had no interest in education and never went to high school. "I was a punk, basically," Brady says, smiling.

But that all changed after a stint in the Army brought him to Alaska from Florida and provided GI education benefits. He says he values his affiliation with biology professor Loren Buck's lab, where the research grant-writing skills are high and expertise is shared. He expects to pursue advanced degrees, probably taking advantage of his growing expertise in hibernation physiology, Arctic mammals and circadian rhythms.

Brady says he's grown to love the technicalities and exactness of research, and the beauty of Alaska.