I AM UAA: Carol Comeau 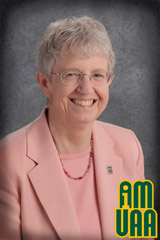 Carol Comeau has been a fixture in the Anchorage community for 38 years.

Most people know that this recently retired Anchorage School District (ASD) superintendent actually started her career with ASD as a noon duty and teacher's aide while her own children were still young. Along the way between support staff and leadership, Carol received her master's degree in education and public administration from UAA and the university later bestowed her with an honorary doctorate of laws in 2007 for her community-minded work through K-12 education.

Little do people know, though, that she started as a journalism major her freshman year of college at the University of Oregon (UO), missed the 1964 Good Friday Earthquake in Anchorage by just a few months and her father-in-law owned a grocery store and butcher shop on 13th and I, the same buildings that have now become New Sagaya.

Born in Berkeley, Calif., Carol always loved kids, always thought about becoming a teacher, but, she admits, "I also had great visions of being an investigative reporter." Since Carol's father died when she was only 7 years old, her mother's advice was that no matter what she did decide to study in college, that she should be able to support her family if suddenly she was on her own later in life. "So I got practical," she says. "I switched over to elementary education after my freshman year, and I've never regretted it."

Carol met her husband, Denny, in 1960 at UO and they married during their senior year in 1962. His parents had moved to Alaska in 1957 and Denny always dreamed of working in the grocery business with his dad, so the young couple followed him in the summer of 1963 to work in Anchorage before Denny had to return to his last year of school in Eugene. 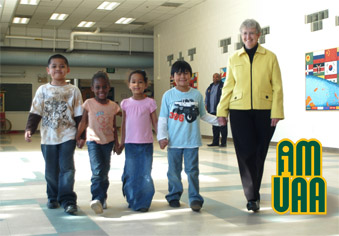 In Oregon, Carol was teaching in Springfield and Denny was wrapping up his degree when one night they were watching a comedy-sketch show, That Was the Week That Was. Suddenly, there was a report of a huge earthquake in Alaska. "We thought it was part of the show, at first!" Carol remembers. But then it got serious and when they realized the magnitude of it, they immediately tried to reach Denny's parents. "It wasn't until Sunday that we made contact," she says. "His dad had been working behind the meat counter; knives were flying around, counters falling over. No one was hurt, though, and the building wasn't damaged badly. His mother was at home in Spenard and their house was fine, too."

Despite the natural disaster, Denny was still determined to work with his dad, so the couple returned to Alaska in 1965. By 1972 he was working for Chevron and was transferred to Spokane, Washington, for two years. By 1974, the Comeaus were back in Alaska and Carol was getting ready to return to the workforce after staying home with their three kids until they were all in school.

Back in the classroom by 1975, Carol got involved with the teacher's union and was president of the Anchorage Education Association in 1984. By then she was already pursuing her master's degree at UAA and was excited about the courses she was taking in school law, school finance and all the other public administration issues that face a district.

"I laugh because I think if my sixth grade teacher could know that I was a superintendent, she would turn over in her grave," Carol says of her favorite teacher, who was always telling her to work harder and stop being so chatty (in classic sixth-grade teacher-student fashion). "I had no aspirations for superintendent along the way. I had to get my endorsement when I became assistant superintendent in 1993, but even then thought I would retire when my boss did. I even entertained ideas of running for the legislature after retiring from education."

Maybe because Carol was never power-hungry she was always effective in her role as superintendent. Her passion for education and for children never waned as she moved into administrative roles. And her proudest success is having been an effective collaborator with the community and the state.

"I think I was able to interact with lots of different cultural and ethnic groups and nonprofits and politicians on both sides of the aisle," she says. "I really committed to community engagement. I hired good people, and then I got out of my office and interacted with the community, the kids and the faculty. That's what I feel good about."

She is proud of the progress in policy that added Jewish and Islamic holidays to the school calendar. And, at the initiative of ASD students, the school board added sexual orientation into the district's harassment policy in 2001. Carol also routinely turned down salary raises of her own in the face of all-to-common district budget cuts.

From K-12 leader to university leader, Carol continually encouraged good rapport and collaboration between her and Chancellor Tom Case, and before him, Fran Ulmer.

"I was really committed to working with the university, connecting early learning with postsecondary education," she says. "I'm always encouraging them to set the bar high with entrance requirements and expectations and I think bringing the College of Education in line with the College of Business and Public Policy for school administrators is a win-win."

As a UAA alumna, Carol has loved the opportunities to advocate for programs on UAA's campus. Staying informed through participation on the College of Fellows board and the Chancellor's Board of Advisors gave her the chance to then talk to her K-12 community about the good things happening at the university.

"I agree with the idea that the university system is an economic engine, and Alaska needs to invest in it," she says. "We need the younger generation to stay and help build Alaska, and the university is really the key to that."

UAA is honoring Carol this fall as one of three Alumni of Distinction with the Alumni Association's Alumni of Achievement Award. Since retiring from ASD this past June, Carol and Denny packed up their house of 33 years and relocated to Bellingham, Washington, to be closer to their adult children and grandchildren.

"My heart will always be here in Alaska," she says.

"I AM UAA: Carol Comeau" is licensed under a Creative Commons Attribution-NonCommercial 4.0 International License.