I AM UAA: Roald Helgesen 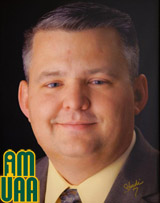 How do you make the 2003 Alaska Journal of Commerce Top Forty Under 40 list? Well, if you're Roald Helgesen it takes some great mentors, a quality education and a lot of hard work. The path isn't a straight shot-there are a few interesting curves and some character-building experiences along the way.

A young Roald decided to give himself a little time after high school graduation to figure out his next steps. "I was industrious, but I wasn't sure what I wanted to do," he says. So he kept busy working for the local movie theater in Sitka as a projectionist and also for a wholesaler, "making sure all the Pepsi cans faced the same way." A phone call from a legislator offered him another avenue and a lesson: in a small community, your actions don't go unnoticed.

The speaker of the state house, a former educator who was running for reelection, told Roald over the phone that he'd been keeping an eye on him and wanted him to come work on his campaign. "There was one particular time when we were fighting for students' rights and I was a rebel who helped lead the charge." It was that kind of initiative that garnered Roald an offer that would inform his education at UAA and beyond.

From campaign volunteer, Roald became a page, a paid 5-month position in Juneau that opened his eyes to the possibility of working in public policy. He learned that a college degree might open the door to a permanent office staff position, the next goal he had in mind. That became the driving force behind his decision to go to UAA and immerse himself in political science.

"I knew I wanted an in-state education," Roald says. Alaska, beyond being the place where he had found engaging work, was home. When he was weighing his options for college, he asked himself, "What am I going to learn? What am I going to bring home?" He says, "My intent was to be very involved in public policy-around advocacy, around the legislative process." Bringing his education home has meant a great deal to Roald, who became president and CEO of SouthEast Alaska Regional Health Consortium (SEARHC) in 2007 after completing his graduate degree in health care administration and served in that role until last year, when he was offered the CEO position at Alaska Native Tribal Health Consortium (ANTHC) and his family decided to make the move to Anchorage.

Roald grew up in Sitka and is an enrolled tribal member with Sitka Tribe of Alaska and the Central Council of Tlingit and Haida Indian Tribes of Alaska and they became key to his success at UAA. Support from Sitka Tribe of Alaska and Sealaska Heritage Institute made him a believer in the power of scholarships. "They make a huge difference," he says. His regional corporation and his tribe were each able to contribute several hundred dollars a year to his education. "[With] those scholarships, plus my Alaska State loan, I was able to make a go of it and spend the time focused on my education." The focus those scholarships enabled has paid dividends. Roald was a member of the political science honor society Phi Sigma Alpha and graduated magna cum laude in 1994 with his degree in political science and a minor in public administration.

"It's what you do with your education that matters. Did you pay attention when you were there, have you applied what you learned since you left? I found I've applied more than I thought I would," he says. "The degree was more than just the ticket to get in the door for a job interview."

Roald remembers how hard he worked in class with Professor Diddy Hitchens. "She taught us how to dissect a political system analyze it from a comparative standpoint. I remember those elements today," he says. She was, it turns out, the only professor at UAA to give him a B. He laughs and says, "I haven't forgotten."

Directly after college, Roald spent his off hours as a volunteer EMT and firefighter, working his way up to fire captain. "I started that immediately because my tribe and Sealaska Heritage Institute helped fund my education and I wanted to give back to the community."

With a background and education in politics and public policy, Roald says, "I fell into health care." He'd taken a temp job answering phones at Mt. Edgecumbe Hospital. His early experiences at Mt. Edgecumbe Hospital and his years providing pre-hospital care as a firefighter and EMT and later as part of SEARHC's medevac team, introduced him to mentors and patients who helped to shape his people-centric perspective on health care.

One of his first transport missions with the medevac team had Roald monitoring a patient who was a friend of his family. The patient was stable, but the flight was turbulent. "When you hold somebody's hand and talk to them and they're talking about your family, then you're making that personal connection. This caring touch is a whole different type of patient care from the hard-charging adrenaline rush environment in pre-hospital care. It is completely different," says the former fire captain. "My philosophy changed. It changed from going over routines in my head, running algorithms, to one that was far more focused on the person that's before you. Although many of our trainers asked us to always consider our patients, it's never so real as when someone reaches out and grabs your hand."

Now in his position at ANTHC, the business of the tribal health system is always personal. "This is your family and friends. In case you ever forget, there's nothing more personal than when your family or community calls you up to share their experiences," he says. "Health system administration, especially the Tribal Health System, is a rewarding career. We can make a difference in health. This is done in each interaction, each day."

Having that built-in quality control means Roald works hard every day to meet expectations. "It's what brings me to work every day...and Saturday and Sunday," he says with a smile. "It was a little bit of turning those Pepsi cans the same direction and a little bit of mentorship and guidance to get my education and I haven't regretted it."

The UAA Alumni Association is proud to recognize the hard-working Roald Helgesen with an Alumni of Distinction Award this year to honor all he has achieved. They'll also have a little talk with Prof. Hitchens to see if she has any more insight into that solitary B on his transcripts. Of UAA, he says, "It's a good school, with great professors. It has the friendliness of a community college and the rigor of a larger university. I am proud to be an alumnus of UAA."

"I AM UAA: Roald Helgesen" is licensed under a Creative Commons Attribution-NonCommercial 4.0 International License.