I AM UAA: Col. Jeffery Roach 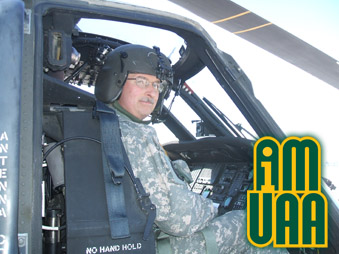 Jeff Roach knows how to run a small city. It's just one of those things you pick up when you earn four academic degrees and serve 31 years in the Army National Guard. He also flies helicopters, appreciates the symphony and knows how to milk a cow. It's no surprise that this lifelong learner has been entrusted with leadership positions and has fostered a love of learning in his three kids. But where did it all start?

Jeff's parents, in search of northern adventure, moved from the Michigan dairy farm of Jeff's youth to the foot of North America's tallest peak in Talkeetna, Alaska, when he was a teenager. Alaska has been home ever since. Growing up in a state that's home to six of the 10 largest national parks in America influenced his decision to study outdoor recreation and natural resources.

After graduating from Susitna Valley High School, Jeff joined the Alaska Army National Guard. He began taking classes at Matanuska-Susitna College, arranging his academic schedule to accommodate his Guard commitments. "There were enough classes being offered that I was able to make it work," he says. The agriculture program awarded him a scholarship and he earned his associate degree in agriculture in three semesters at UAA's community campus in Palmer. "I liked the small school atmosphere and the rural setting. We had a tight-knit group of students in the agriculture program where I developed wonderful friendships."

He also kept busy. Beyond his school and Guard commitments, he also worked part-time for some of the dairy farms in the Mat-Su Valley that were just starting up through a state farm development program. Guest speakers in his agriculture classes discovered his dairy farm background and offered him work on their farms milking cows. Not the most traditional after-school job in Alaska, but one he was glad to take if it meant helping him achieve his goals.

Home nowadays is Fairbanks where Jeff works as Northern Region planning manager for the State of Alaska Department of Transportation and Public Facilities. He is also a lieutenant colonel and currently serving as chief of staff for the Alaska Army National Guard.

Jeff and his wife, Sherilyn, whom he met while studying natural resources at UAF, started their careers in Eagle, a rural town just west of the Yukon-Alaska border with seasonal access on the Taylor Highway. "She has an adventurous spirit," he says. From New York's Vassar College to UAF, Sherilyn had a little time to acclimate to frontier living before accepting a teaching post in Eagle alongside Jeff in his new role with the National Park Service as a park ranger. Jeff's first impression of Eagle? "I loved it!" he says. "I love small towns." From one small town to another, the Roach family moved from Eagle to Tok, where Jeff took a position with the Bureau of Land Management before ultimately settling back in Fairbanks.

Jeff's travel credentials extend well beyond Alaska, however. In his role as an Army National Guard officer, he's been deployed to Haiti, Honduras, Bosnia, Afghanistan and Kosovo. His missions have varied-from peacekeeping to disaster relief as he worked his way up from helicopter mechanic to Officer Candidate School graduate and helicopter pilot. One master's degree in management and another in strategic studies, in combination with his field experience, helped to prepare him for his 15-month deployment (2006-2007) as operations officer for the 1/207th Infantry Brigade in Kandahar, Afghanistan. "It was like running a small city," he says of his role overseeing operations at the Kandahar airfield for 14,000 troops. "I didn't sleep much."

Knowing that his family was part of a caring community back in Fairbanks made the long deployment a little easier for Jeff. All three of his kids graduated from West Valley High School in Fairbanks and have gone on to college and careers throughout the U.S.

Even with an "empty nest," the Roaches have had no trouble staying busy. Sherilyn plays the viola with the Fairbanks symphony and the Fairbanks opera and Jeff volunteers his time with several community organizations.

"I think the military breeds volunteerism," Jeff says. "When you come back from a high tempo operation, volunteering is a great way to use up all of that energy in a positive way."

In addition to keeping busy at work and in the community, Jeff is cheering his kids on as they progress to meet their own goals. Oldest daughter Amber, marine biology degree under her belt, is working in a veterinary clinic and just welcomed a baby girl, Jeff and Sherilyn's first grandchild, with her husband in Minnesota. Son Daniel is a senior at Illinois Institute of Technology studying aerospace engineering with plans to head to U.S. Air Force flight school after graduation. Youngest daughter Victoria is a junior at University of Redlands studying sociology and anthropology.

"Education has always been important to me and my family-my wife has been a high school teacher for 24 years, and I've been involved as a student, instructor and supervisor. I feel that being a life-long learner is an important factor for a successful life," Jeff says. And while he may be done accumulating those academic degrees that started with an A.A.S. from Mat-Su College, he is looking forward to accepting new challenges as he progresses in his side-by-side civilian and military careers.

But it's not all work and no play! Jeff is looking forward to another winter of ice fishing and cross-country skiing. And it's never too early to start passing on his secrets to success to his new granddaughter on their next visit.

"I AM UAA: Col. Jeffery Roach" is licensed under a Creative Commons Attribution-NonCommercial 4.0 International License.