I AM UAA: Mariano Gonzales

B.A. Art '76
Chair and professor, Department of Art
Hometown: Anchorage, AK (by way of El Paso, Texas)
Fun Fact: Moved to Alaska in 1959, the year it became a U.S. state. 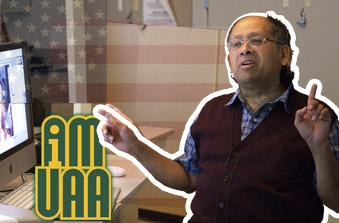 This year, Mariano Gonzales marked 53 years as an Alaska resident and 24 years as a professor for UAA. He's been pushing the limits of art and technology since his arrival at UAA (when it was still Anchorage Community College) as an art student roughly 40 years ago, or to do the math a little differently-more than 12 chancellors ago. (Tangential fun fact: Impress your friends with intimate historical knowledge of the university; the UAA/APU Consortium Library online archives hosts a timeline of UAA from 1950-2004.)

In addition to exhibiting his art throughout Alaska, Mariano has work displayed in the permanent collections of the Alaska State Museum, the Anchorage Museum of History and Art, the University of Alaska Museum in Fairbanks, the Loussac Library in Anchorage, the Alaska State Council on the Arts and UAA's College of Business and Public Policy. Mariano was honored with a Mayor's Award for the Arts in 2010 as an Outstanding Individual Artist.

One of the benefits of working in academia as an artist, Mariano says, is the freedom to create. "I'm extremely fortunate working as a professor. I'm not obliged to sell anything-I make my living teaching. It frees me up. My work can be whatever I want," he says. A recent article in Tikkun magazine lauds him as "...a major socially conscious artist whose works would be far more visible if he resided in New York, Los Angeles, Chicago, or indeed, in any major urban center in the 'lower 48.'" 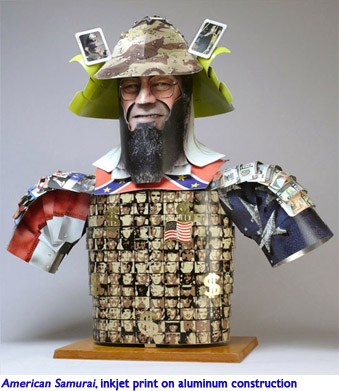 In what could possibly be considered the best performance review a professor and colleague could receive, one commenter on the article, "Micha," has this to say about Mariano: "As a former fine art student and Art Dept. staff member at UAA, my fondest memories are of chats with Mariano, whom I consider the most influential mentor I have ever known."

Mariano arrived at Anchorage Community College as a student moments after the school took up residence at its current location on Providence Dr. "It only cost $100 bucks to go for a whole semester," he says. "And the teachers were amazing-Alex Combs, Wassily Sommer..." He would later return to teach beside some of his former instructors after completing his M.F.A. at Rhode Island School of Design, where he primarily studied light metals.

Mariano returned to Alaska during the oil boom years in the late '70s and early '80s. "I came back with the idea that I would open up my own jewelry/metal studio to do custom work. Except for one thing: I hated to work with other people," he says half-laughing at the memory. "They would come up with these ideas that were just horrible and I didn't want to do them. Not even for money. Not even for money." So to earn money, he began freelancing as a photographer, covering weddings and contracting to photograph art exhibits. He set up a dark room and began experimenting with color photography.

"I didn't do anything straight-it was all highly experimental," Mariano says. "I guess I figured out that the part that appeals to me most about art is discovering what can be done with it technically." And he began to push the limits of technology and art, even developing his own tools that would allow him to achieve what he wanted to with the aid of technology.

It's just in the last few years that Mariano has begun to feel confident as an artist. He says with regard to technology, "I feel that I've gone through a really long apprenticeship where I really didn't feel worthy as an artist, but now I do. Just in the last 3, 4, 5 years now, I feel like I'm ready to get serious about creating." The humor in that statement comes from hearing it while sitting in the sight gag that is Mariano's office in UAA's Fine Arts Building. It's literally waist-deep in art, wall-to-wall with boxes and sculpture prototypes, with just a smattering of obsolete technologies here and there. The walls are home to taped-together paper models for past and present projects. All of the chaos, a testament to his fervor as an artist (and perhaps his longevity at UAA). It's the office of a very productive "apprentice" indeed.

As a master of digital art as well as sculptural design, Mariano shows his students how to go from concept to paper to fully realized project, but rather than a 1-2-3 linear process, it's sometimes a 1-2-1-2-1-2-3 dance from 2-D rendering, to digital design, then prototype, back to digital for more refining, etc. But instead of standing before a canvas, many of Mariano's students are at home in the computer studio. 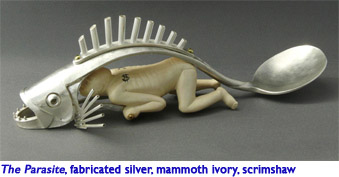 Mariano also makes time to do some of his own work in the studio when he can between his teaching and administrative roles. Right now he's hard at work on a mammoth ivory scrimshaw piece called "Survival of the Fittest." In a mixture of traditional art form with depictions of an AK-47, an Alaska Native, a predator drone, a game controller in the hands of a wheelchair-bound white businessman and slaughtered animals. "At first glance, it may be offensive, but it's about our cavalier attitude toward that which sustains us," he says. "I'm sure some people will take it that far and think about it. Other people will say, 'Nice scrimshaw. I wish he had a better subject."

So what is his goal today as an artist? To make people think. Not necessarily to agree with him, but to think about the world they live in. "We're a democracy, so if there's anything wrong with this country it's because of us-we're not doing our job. So a lot of my work is commenting on us. If I can do work that encourages people to look at themselves and think about what they are doing, maybe it will make a difference," he says, and then after a pause, "Or maybe not."

Mariano is also hard at work planning an upcoming exhibit for the Fine Art Museum in 2014. One message he tries to drive home to his students: pay attention to quality and craftsmanship. "The work itself has to be very interesting and impeccably crafted. None of this sloppy crapola. It's got to be well done for people to take it seriously. I want my work to have that level of craftsmanship and vision where even if they don't agree with what I'm saying, they'll look at it because technically it should be amazing."

"I AM UAA: Mariano Gonzales" is licensed under a Creative Commons Attribution-NonCommercial 4.0 International License.