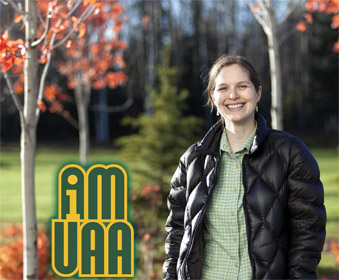 This might sound strange, but Nora Nagaruk (E'98) has learned a lot about being a doctor by being a patient. At age 14, growing up in Unalakleet, she broke her hip and landed in Anchorage for surgery. Quite an ordeal for a teenager, but what Nora remembers is getting to see what it would be like to work in the medical field.

"I got exposed to the doctors and nurses, went through physical therapy-it was a time in my life that I was starting to think about what I wanted to be when I grew up, so it was really good exposure to have as a patient," she says.

Fifteen years later, during her second year of medical residency, Nora was diagnosed with acute leukemia. "Being a patient that time around, I had all this medical knowledge, which was really helpful!" she says. However, she also admits that it initially took away all her drive to become a doctor. "That was the hardest thing I have ever gone through. I remember being wheeled into my room and thinking 'I'm a doctor; I'm not supposed to be here.'"

What Nora learned was that she is not invincible. Family and a good quality of life became that much more important to her, and she created healthier boundaries between those values and the feeling that many new doctors have of "having to save the world."

Faced with not being able to complete her residency, but still wanting to return to her Inupiaq community in the Norton Sound region, Nora had to come up with a plan B. She reached out to her medical network to find a niche for herself, and for the past five years she has been a general practitioner and community health aide instructor with Norton Sound Health Corporation in Nome.

"It's been perfect," Nora says of her work after being away from the medical scene for three years as she battled leukemia. "It was the perfect way for me to get back into medicine, because I had to teach the basics. Also, we are one of four training centers in the state, so we get students from our region and from other areas in the state as well. I love getting to interact with people from villages all over Alaska."

Mix teaching with seeing her own patients and she has found a balanced vocation despite the setback in her health. And she takes a pro-active approach with her patients after having been a patient herself all that time. "I like to have my patients help make decisions and feel like they have control of their health," she says.

The other lessons for Nora about being a doctor came from mentors like Dr. Bill Paton, who was her hip surgeon when she was 14. He later sponsored her during a pre-med summer program when she was an undergraduate, and she did clinicals with him during her third year in the WWAMI program and a rotation with him during residency.

Family members have been a big support for her as well, like her cousin Adrian Ryan (WWAMI E'80) who helped her believe in herself: "That I could come from a village and become a doctor."

And we'd be remiss if we didn't mention her brother, Wil, as well, who was Nora's stem cell donor-a successful match that has kept her leukemia in remission for six years.

Buoyed by this network, the loving support of her husband and a fighter's determination, Nora has been able to fulfill her dream of practicing medicine in rural Alaska.

"I always knew I wanted to practice in Alaska," she says. "My heart never changed about that throughout medical school. I am back working for my people, helping my people."

"I AM UAA: Nora Nagaruk, M.D." is licensed under a Creative Commons Attribution-NonCommercial 4.0 International License.