About this time every winter, the thought of an ice-free sidewalk or driveway is practically intoxicating. Imagine-no more shoveling or chipping ice, not to mention face plants, twisted ankles or broken wrists.

Now, a UAA geotechnical engineer and a collaborating electrical engineer from the University of Houston have found and tested a cheap way to melt snow and ice off pavement. Two years of testing has proven their method flawless and now they have a patent pending on their invention. 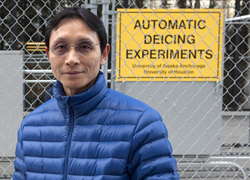 Meet creator Joey Yang.  Born in south central China, he's slight, wiry and enthusiastic about whatever he's doing. Most of his research involves understanding how frozen ground interacts with bridges and roadways, which is not with as much stability as users might wish. But that's another story.

While warm, dry sidewalks are a bit off the beaten track for him, there's a personal reason why Yang is so fired up about this particular invention.

His own father-in-law was visiting from China one recent winter and helping two of his three granddaughters catch an early-morning school bus. It had been one of those classic freeze-thaws so common in mid-winter Anchorage. The Yang family porch was a sheet of ice, made even slicker by a thin layer of water.

Yang had attacked the mini-glacier with a hammer, which was damaging the subsurface, and not working anyway. Every morning, the berg was back, making it nearly impossible to navigate upright.

And in fact, Yang's Chinese father-in-law fell that very morning and broke his thumb. Yang shook his head and said to himself, 'There's got to be a better way."

At a conference three years ago, he met electrical engineer Gangbing Song from Houston. Song had been experimenting with commercially available flexible carbon fiber that conducts low-voltage electricity. He was using it to warm surfaces in his lab. Yang couldn't wait to test the materials under more challenging winter conditions. Their collaboration was born.

In 2010, Yang and the UAA facilities department built a test sidewalk 30 feet long and four feet wide. They laid five panels of concrete, and in panels two, three and four, they embedded strips of carbon fiber tape into 4-inch thick pavement layers. Insulation boards beneath the pavement kept heat from dispersing into the ground. Panel one and five served as controls. The whole sidewalk had a 1-inch slope for water drainage.

In a paper the team published in September 2011 in the Journal of Cold Region Engineering, Yang described how one test went.

On Feb. 17, 2011, NOAA forecast a snowstorm to hit Anchorage during the evening hours. Researchers turned on their de-icing system at 6 p.m. Snow started to fall about 10:30 p.m. and continued well into the next day, for an accumulation of about six inches. They had no web cam set up to observe the sidewalk during this storm, but from 7 a.m. until the system was turned off at 7 p.m., no snow accumulated on the sidewalk. The cost for keeping the three panels snow- and ice-free over the 24-hour period was about $4, or about 2 cents per square foot per day. 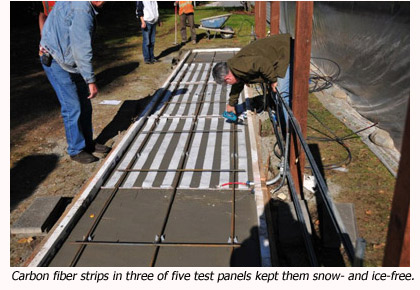 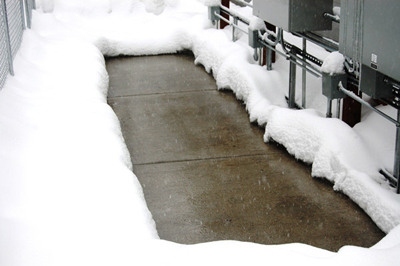 The miracle material in all this is carbon fiber, invented in 1958 but steadily improving. Right now, 50 feet of this costs less than $200 and dropping. It is light, strong, non-corrosive and easily conducts low voltage electricity. Typically, it is used to reinforce concrete columns for seismic safety, but is also found in lightweight aircraft construction.

Yang's invention has a lot to like. If power for warming the sidewalk could come from renewable sources like wind and solar, says Turletes, "I could write off the cost."  And if the inherent strength of carbon fiber helped sidewalks last longer, that would be an additional cost savings. Not to mention savings from avoided slips and falls.

These are exactly the real-world problems Yang likes to solve. "I like technology that has impact for the community," he says. Besides, creating ice-free pathways is much more immediate than working up theories on frozen soil stability.

NOTE: A version of this story ran in the Anchorage Daily News.

UPDATE 7/31/2017: Yang's invention is now being commercially distributed throughout the U.S. by Arctic Heat Technologies. Learn more in this story from Your Alaska Link.

"Joey Yang's quest for an ice-free sidewalk" is licensed under a Creative Commons Attribution-NonCommercial 4.0 International License.