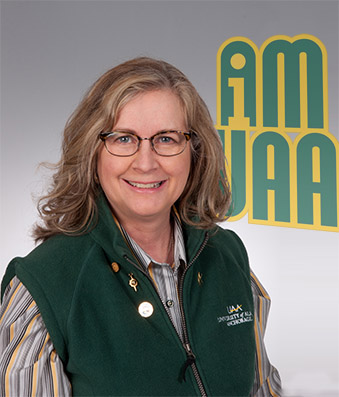 When Amanda first came to Alaska in the '70s, she intended to build a house in Bear Valley, attend Anchorage Community College and work. There was one problem though: she did not have enough money to build a house on the land yet. So she lived in a tent to help save money while working a part-time job that left her time to take a few classes. She pitched the tent before breakup by clearing snow off the west face of a hill.

One adventure Amanda recalls from the summer that followed is trying to fall asleep as her dog shivered uncontrollably next to her sleeping bag. "I distinctly remember hearing rustling on the road above where the garbage was stored locked in a dog kennel. I could not see what was causing the commotion, but I knew it was a bear. The only place to run for safety was up toward rummaging sounds on the road where my car was parked and that made no sense. I willed myself to be super calm and wished the sound of my breath would disappear in the night. I could not sleep but kept still until the sound lumbered away. It was not until the next day that I learned my brother had visited my campsite earlier in the day and hung a salmon in a tree for me in a sort of cache. He placed it high so that bears could not get it, not knowing the scent would bring them toward my campsite. Luckily for me, the salmon was enough to satiate my midnight guests."

That summer was filled with plenty of human visitors as well. They were welcome guests, unlike the bears, but they also never left hungry. To make the campsite feel like home, she built a Dutch oven in the ground and turned the dry area under a large spruce tree into a living room.

"I had a lot of guests so I was always cooking and had coffee on the burner at all times," she remembers. "People would come up and camp for a couple of nights or just simply spend the day at my home."

Summer was filled with many consecutive rainy days and the novelty wore off when snow fell on her high valley home at the end of September. Still struggling to balance school and work, she questioned whether she needed a degree at all. She knew she would have to rearrange her life to make school the number one priority, something easier said than done. For Amanda, it meant a smaller income and a bigger tuition bill-leaving her with the age-old question, "How do you support yourself as a full-time student?"

To help answer that question, Amanda checked in with UAA's Office of Financial Assistance and discovered that the Division of Student Development needed someone who could type. She fit the bill and got the job. She discovered other opportunities as well. She served as a DJ for UAA's radio station, KRUA. She prepared layout for the student newspaper, typed minutes for Club Council and created graphics for student event flyers. She even found time to volunteer with student clubs, where she enjoyed crafting potluck meals with other students.

She always brought food to Art Club meetings on Fridays. She soon found out that food had a way of improving attendance and much like the old folktale about stone soup, other students would find things to contribute like corn breads, cinnamon rolls, salads, chili and other homemade goodies. One of her favorite meals to cook and share at that time was scrambled eggs in a crockpot with cream. She claims this is a great way to make moist scrambled eggs.

Amanda credits her involvement with clubs and the university community as far more important to her story than the more stunning part about living in a tent for a while. "Each opportunity was a stepping stone. I had no idea where it would take me, but when I ended up there, it was fantastic. One opportunity led to another."

Indeed, looking back on Amanda's resume, that typing job she took in student development looks like the catalyst that set everything else into motion. It helped connect her with the campus community, led her to other work and volunteer openings, helped her develop leadership skills and build important relationships that led to a variety of important roles in the university system. From 2006 to 2012, she served as the director of the Observer Training Center, part of UAA's Community and Technical College, and then spent about six months as operations manager for University Honors College. That's a long way to come from that first little stepping stone.

She left her position at UHC in late 2012 and her main focus since has been the restaurant her family owns in town. It's a great place for Amanda to apply her years of leadership experience toward one of her ultimate passions: food.

Never one to limit herself to just one endeavor, she's also been hard at work on various teaching and illustration projects and planning her next move. "Food is a passion, but leadership," Amanda says, "is an earned opportunity and a skill I plan to use to help others." We can't wait to see where she'll use it next.