Teens in an Anchorage classroom recently learned about economics without having to crack a textbook, endure a lecture or decipher intricate mathematical arabesques.

But they didn't. The professors chose, instead, to engage the students in a game using beads, bowls, cups and measuring spoons, to show them what could happen when people take as much as they can of a shared resource like fish or the Earth's ability to absorb greenhouse gases, without rules to keep that resource from being exhausted.

"What we're talking about is called a social dilemma," Murphy said. "We designed a game with a lot of characteristics existing in the salmon fishery of Bristol Bay."

Murphy developed the beads game six years ago with one of his other colleagues, Gunnar Knapp, interim director and professor of economics at the Institute of Social and Economic Research (ISER) in Anchorage. Murphy and Knapp spent about two weeks devising and tinkering with the game.

"We just kind of experimented, sitting in our living rooms, saying 'let's try this,'" Murphy said. 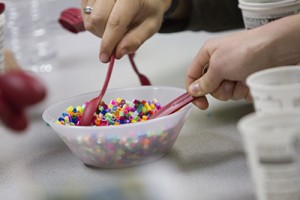 The rules had to be simple. Murphy tested the game with his then-6-year-old son, using jellybeans instead of beads, a birdbath instead of a bowl and different-sized spoons he could choose from (but had to "pay" varying amounts to use).

"I watched what he was doing, to see if, in essence, he could understand the game, see how it played out," Murphy said. "I knew if a 6-year-old could get it, a college student would understand."

In the game, a teaspoon of beads equals one dollar. Students gather, in groups of four, around a bowl that contains 72 teaspoons of beads. Each student has a cup he or she may hold, but not pick up. Everyone in the group has 45 seconds to use a teaspoon to scoop beads from the bowl into his or her cup. "Earnings" are based on how much each student "harvests" into his or her cup.

At the end of the allotted time, Murphy's assistants-Dan Allen (a recent UAA economics alumnus) and Murphy's son, Ned, a Steller student-calculate how many teaspoons of beads remain in each bowl, jot down the quantity of beads kids at that table scooped out of the bowl and pour double that amount into the bowl. A critical caveat: Students are not allowed to talk during the game's first round.

"I didn't talk about common-property resources beforehand," said Varee, who teaches juniors and seniors in the Steller government class Murphy and Smith visited. "I didn't want to set this up because I worried about 'poisoning the well'-my guys are pretty sharp; they'd go on the web, do their own research. They had no idea what was happening other than I said we'd be having a visit from a Nobel laureate and play a game. As soon as I said that, they were up for it."

Murphy halted the game after the time elapsed. Dan and Ned measured the amounts of beads and recited the figures to Murphy, who recorded the numbers on an Excel spreadsheet. Every group had quickly overharvested the resource-a circumstance Murphy referred to as a classic "Tragedy of the Commons."

Murphy then gave the students a chance to play the game again, but this time the students could talk. They immediately started strategizing how they could scoop in ways that would result in a more sustainable harvest pattern.

The teens who quickly emptied the bowl in the first round learned they would have been better off scooping the beads less rapidly, when it came time to double the amount at the end of the first round.

Murphy's beads game showed the teens that institutions matter when it comes to allocating resources society holds in common; that a change in rules-first prohibiting and then allowing conversation-results in a huge change in behavior; that rules can be formal, like a government regulation, but individuals can cooperate and come up with their own informal rules about managing, for example, a fishery.

"The takeaway is, what happens with public ownership of resources if there are no limits on consumption," Varee said. "We're faced with those issues all the time in Alaska-we have an extraction economy; we export and don't do value-added. You have to shepherd resources carefully if you're going to have the benefits down the road. We saw pretty quickly what happened to the resource when students weren't able to talk about how to manage the resource, and what happened when they did." 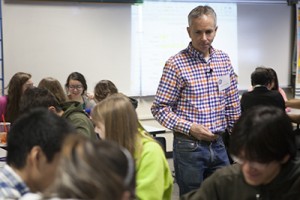 Tommy Rademaker, 16, was one of the 24 students who played the bead game. He first thought the point of the game was to compete, and gather as many beads as he could.

"It then became clear the point was to properly ration it, but at that point, communication wasn't possible; there wasn't much that could be done about it," said Tommy, who has not yet taken a required high school economics class but plans to attend college and earn a business degree.

"After the second round, we were figuring out the best way to maximize possible profits for everyone, to equally take half of the 72 scoops so it could be doubled every time. Everyone took nine scoops each and then that was half exactly. Another 36 scoops would be put in the bowl for the final round. After that, there was no advantage to being equal in distribution."

The game, Tommy said, taught him everyone has to rely on others not to overuse.