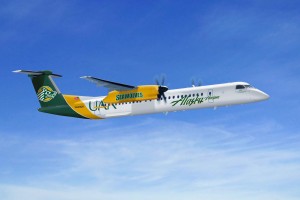 Mascots and school colors from two of Alaska's most beloved and heated collegiate rivals, the University of Alaska Anchorage and the University of Alaska Fairbanks, will soon be featured on two of Alaska Airlines' Bombardier Q400 turboprop aircraft. The colorful paint themes were unveiled to a crowd of fans at the Sullivan Arena on Friday, Dec. 6, where the Alaska Nanooks and UAA Seawolf hockey teams battled in the first of a four-game series to claim the Alaska Airlines Governor's Cup.

"We're thrilled to show Alaska Airlines' strong support of education while growing our fleet of university paint themes with our first two schools in Alaska," said Marilyn Romano, Alaska Airlines' regional vice president - Alaska. "The UAA and UAF school colors will proudly fly between our two largest cities and from Anchorage to Kodiak."

Like other university-themed aircraft operated for Alaska Airlines by its sister carrier, Horizon Air, the Nanook and Seawolf planes will be painted at no cost to the university and will fly primarily between Anchorage and Fairbanks and Anchorage and Kodiak when the carrier introduces the 76-seat Q400 to the state of Alaska on March 3, 2014. The UAF and UAA planes will be painted and unveiled in February next year. 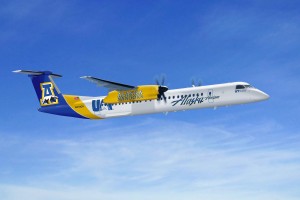 "These planes are yet another example of Alaska Airlines' commitment to higher education in Alaska," said UAF Chancellor Brian Rogers. "I can't wait to see the Nanooks and Seawolves take to the skies above our great state. The planes will serve as a reminder of both the quality education and spirited athletic rivalry that embodies our universities."

"We are grateful to Alaska Airlines for their continued support of UAA," said UAA Chancellor Tom Case. "It is a great honor to have our university represented in this way. These planes will be a point of pride for our UAA and Alaska community."

The UAF and UAA planes will be the 10th and 11th university-themed aircraft flown by Horizon Air since 2008. Other paint themes represent the universities of Idaho, Montana, Oregon and Washington, as well as Boise State, Montana State, Oregon State, San Diego State and Washington State. Alaska Airlines recently unveiled the "Spirit of Education." The specially-themed Boeing 737-900ER was dedicated to the students and staff of Raisbeck Aviation High School located in Tukwila, Wash.

Alaska Airlines operates more daily flights (158 a day during peak season) to more destinations (30 cities) throughout the state of Alaska and to the Lower 48. The carrier offers Alaska residents exclusive deals through its Club 49 program, which includes special perks like free checked bags, last-minute travel discounts and exclusive emails featuring weekly fare sales. Residents can learn more at the Club 49 website www.alaskaair.com/club49 and on Facebook at www.facebook.com/AlaskaAirClub49.

High-definition artist renderings of the planes are available in the Alaska Airlines online image gallery at http://bit.ly/IuFRxE .

Horizon Air is a subsidiary of Alaska Air Group and flies to 39 cities across the United States, Canada and Mexico.

Alaska Airlines, a subsidiary of Alaska Air Group (NYSE: ALK), together with its partner regional airlines, serves nearly 100 cities through an expansive network in Alaska, the Lower 48, Hawaii, Canada and Mexico. Alaska Airlines has ranked "Highest in Customer Satisfaction Among Traditional Network Carriers" in the J.D. Power and Associates North America Airline Satisfaction StudySM for six consecutive years from 2008 to 2013. For reservations, visit www.alaskaair.com. For more news and information, visit the Alaska Airlines Newsroom at www.alaskaair.com/newsroom.