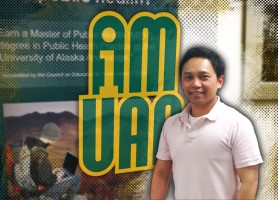 When Gabe Garcia's family moved to Alaska from the Philippines, there were fewer amusement parks and less candy than he expected. He was 12.

"Since it was America, all I thought about was chocolates and Disneyland and all of that," he says with a smile.

What he got was midnight sun in June and his first foray into coed public school. But after the initial culture and climate shock, Anchorage became home base, where Gabe spent many of the last 26 years, in between college and graduate school in California and Massachusetts.

In 2007, he returned to the Philippines for his doctoral research on Filipino smoking behaviors, the first in his family to earn a Ph.D.

"One of the communities where I collected data was actually a town where my father was born and raised," he says.

While he was there, Gabe remembers thinking, "It's not just about collecting data anymore, it's learning about myself and the history that I have."

Gabe's aunt, his father's sister, was the first to settle in Alaska. She was a member of The Paulettes, an internationally popular all-female band playing '60s covers.

"They actually played on the Ed Sullivan show, if you can believe that," Gabe says. His aunt's travels eventually took her to Alaska, where she met her husband.

Gabe's family joined her in Alaska in 1987, one year after the People Power Revolution ended the 20-year Marcos dictatorship.

"It was a crazy time," Gabe recalls. "There were political killings. We were sent home from school for bomb threats. During the People Power Revolution, I could see tanks on the highways. It was kind of scary."

But, as a young person, he just cared about doing well in school, a trait that would carry him through junior high and high school in Anchorage, a pre-med program at UC Davis, graduate school at Boston University and a doctoral fellowship at UCLA.

Serendipity in the Philippines

While Gabe's aunt met her Alaska husband during her travels, Gabe reversed the trend and met his wife when he was conducting doctoral research in the Philippines. On Gabe's last day of interviews in Quezon province, he met his future wife walking down the road. Luckily, he had a little more time to get to know Dyan before he had to fly home to Los Angeles to complete his dissertation. They successfully navigated a long-distance relationship for four-plus years and married in 2011 at Alyeska Resort.

The question of what to be when you grow up plagues most kids. Gabe, who was a dedicated student, thought physician. He liked the idea of helping people, so he headed off to college at UC Davis, where he majored in biochemistry, following a pre-med track, and minored in English.

Looking back, he wishes he had access to a mentor when he was a high schooler in Anchorage, someone like his colleagues in the Della Keats program who could have offered him a glimpse of his options.

For the last five years, he's mentored Della Keats students from Alaska high schools, giving them a behind-the-scenes look at academia and careers in public health or a related health sciences field. This year he's working with a Hmong student, Kou Thao, who thinks he might want to be a doctor. Gabe's excited to follow his progress over the next few years.

"I really feel like mentorship is an important thing to do to get students motivated and excited about college and the potential for making a difference in communities, even before they finish school," Gabe says. "So every time I mentor, I see myself-how I would have been, what I would have liked to see." It's his chance to be the mentor he never had.

The part where Gabe unwittingly creates his own job

Even without a mentor, Gabe was able to make some savvy decisions about school. After graduating from UC Davis, he went on to BU, still pursuing the idea of medical school, when he got the chance to take a public health course. It was the fit he was looking for.

"Public health is all about disease prevention and health promotion," he says.

After graduation from BU, he accepted a research post in UAA's Office for Circumpolar Health Studies where he connected with Larry Weiss, now a professor emeritus.

Recognizing the need for Alaska to train more public health professionals, Larry recruited Gabe to help him draft curriculum and craft a Master of Public Health program at UAA.

"Little did I know I'd be back teaching in the program," he says of his work writing MPH curriculum. "I was actually making a job for myself."

Larry and Gabe spent a year shepherding the proposed program through all the channels. "I remember thinking, 'I'd like to teach in a program like this,'" he recalls.

So he started looking at his Ph.D. program possibilities.

"I told myself, if I don't get any scholarships, I'm not going to go," he says. But luck (and a strong academic resume) was on his side. "I was given a generous offer at UCLA, so I didn't have to pay anything."

Shortly after defending his dissertation in 2008, a position with UAA's MPH program, the one Gabe helped to create, opened up.

"I applied and, fortunately, was given the position. It was an exciting time for me, coming back to where it all started," he says. "I still remember the cubicle where I worked, writing all the curriculum and now to put it into practice, teaching, is very meaningful."

Connecting with colleagues and inspiring the next generation

In the last few years, Gabe's research interests, including Asian and Pacific Islander health disparities and health risk behaviors, have helped to connect him with colleagues and students who share his passions.

Together with professors E.J. David and Joy Mapaye, they taught an Honors College course, Asian and Pacific Islander Health Studies.

"Several of the students ended up working with us on research and what I'm most proud of is that this core of students ended up creating a student organization, the Asian Pacific Islander Community Wellness Club, just last year with the purpose and mission of addressing health in the community," he says.

While it's still no Disneyland, Gabe seems energized by his work with students in Alaska. Like he realized as a doctoral student researcher in the Philippines, connecting with your heritage, knowing who you are, can help sustain your passion for making a difference in your community.

Here at UAA, through mentorship and through his teaching responsibilities, Gabe gets to help students find what sparks their enduring interests before they're knee-deep in a dissertation. But he's also going to be cheering them on to dream big.

Who knows? They may have the opportunity to invent their own jobs in the future, too.