I AM UAA: Christa Eussen

UAA wasn't Christa Eussen's first choice for college. Born and raised in Anchorage, she admits she was a little excited about the possibility of going Outside for school like so many students in her Anchorage School District gifted program cohort. Life had other plans.

Christa's junior year of high school her mom passed away and she decided to stay close to her dad and younger brother.

"My brother is autistic and I didn't want to leave my dad alone with him as a single parent, so I decided to stay here and it actually turned out for the better," she says.

In fact, it's been a pretty "sweet deal," she says with a smile. Her hard work at West High School, where she was also a three-sport athlete, netted her a UA Scholar award. With that boost, as well as scholarship awards from Doyon Foundation, Christa is on track to graduate debt-free with the Class of 2014 this spring with a bachelor's degree in biochemistry, a minor in mathematics and an impressive research resume. For her, the value goes beyond just affordability, though. It's about connections.

"I feel like you have more one-on-one time with your professors and get to know them. I know the entire chemistry department. I think if I went to UW, it would be a different story," she says. "All the opportunities I've gotten through [undergraduate] research, I don't think I would have gotten that somewhere else."

For the last two years Christa has been elbow deep in blueberry compound biochemistry research with Assistant Professor Colin McGill. Their work might one day make life a little easier for people who suffer from Parkinson's or dementia.

New project developments have brought Christa full-circle, back to working with the lab rats that accompanied her first foray into undergraduate research at UAA.

As a freshman University Honors College student, she connected with professors in the psychology lab where she studied the effects of alcohol on rats and hamsters. She was immediately hooked on lab research. She was even a little taken with the rats.

"The babies are really cute!" she insists.

"I've completely maxed out my research credits in both chem and bio," she says with a laugh.

Life with "the girls"

Christa always makes time in her busy schedule for "the girls," her Japanese Chins Aya and Emi. She's been showing dogs professionally since she was 11 years old. What makes the Japanese Chins stand out in their miraculous "wash-and-wear hair," Christa says. 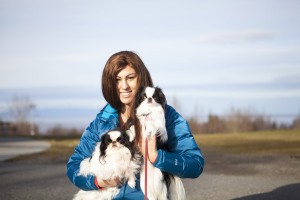 Christa with Emi and Aya

"What you're supposed to be able to do is dunk them in the bathtub, then let them run around and their hair should dry perfectly," she says. "It shouldn't knot, it shouldn't wave. It should just be perfectly silky-smooth straight. It's awesome."

From her first nerve-wracking show when she was just a kid, Christa has gone on to breed and show her dogs and other people's dogs professionally.

"It's fun and expensive," she says with a smile.

Get ready to meet Dr. Eussen

Next up for Christa is med school. She's just sent out a blitz of applications and is doing a little nail-biting as she waits to hear back from schools near and far — as close as Alaska WWAMI and as distant as Tennessee.

"Medicare is cracking down on readmission rates. If a hospital doesn't meet a certain standard, they get penalized financially," she says. So she worked with two registered nurses and the discharge care coordination team to study the numbers.

During a meeting to discuss the data, she crossed paths with ANMC's chief of internal medicine, Dr. Alanna Small, who also happens to be married to Fred Rainey, director of Christa's home away from home, the UAA Department of Biological Sciences.

"Dr. Small was really, really nice and got a third-year D.O. [doctor of osteopathic medicine] student up here who let me play medical student for a little bit. It was pretty fun," Christa says.

This wasn't her first time working at ANMC, either. Her mom actually helped her down an early path that led to her recent externship.

When Christa was 16, her mom made a career shift over to Alaska Native Tribal Health Consortium (ANTHC) to work as sales and marketing director for their AFHCAN project, which designed and developed telemedicine carts for rural villages.

"She really wanted to get back to her Native people, get back in touch with the whole culture," Christa says.

"My grandma happens to be one of the Natives who went through the boarding schools, so we don't really know our history," she explains.

"Secondhand from my mom, what my grandma got out of boarding school was you don't speak of your culture, you marry a white man and you are a housewife."

An article by the director of the Center for Alaska Education Policy Research, Diane Hirshberg, that was published in the Journal of American Indian Education in 2008 takes an in-depth look at Alaska Native boarding schools in the early 20th century, a Bureau of Indian Affairs-led attempt at formalized education that is widely regarded as a black mark on state history.

Christa's story is real-life testament to the lasting effects of misguided policy on cultural identity.

"Typically, when you see an Alaska Native person, they have this whole big background and they have kuspuks and their aunt makes cool things with beads," Christa says. "I'm missing that."

"Now that I'm getting older, I feel like there's this hole. I don't even know my Native language. I don't know where my grandma grew up. I just know we're from Holy Cross and that's about it," she says with a shrug. "It's kind of sad."

But her mom's attempts to reconnect with her heritage have also had a lasting effect on Christa. She forged the connections at ANTHC that landed Christa a summer internship at the Healthy Alaska Natives Foundation at the age of 16.

That summer she met IHS externs and ANMC interns. She was immediately envious of all the cool things they were doing.

"I thought, one day I want to work at the hospital," she says.

She may even want to make a career out of it. One thing she's noticed working at ANMC is the difficulty they have in recruiting and retaining doctors who are committed to Alaska.

In another nod to Dr. Small, Christa says, "I'd never considered internal med before this summer, but now I'm actually heavily considering it."

She can see herself coming back to Alaska and helping to serve Native and rural populations.