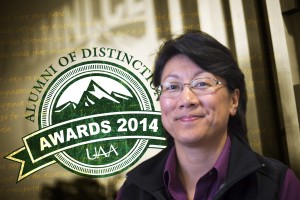 Next time your plane lands safely, say a little thank you to the pilots, the plane-even Mother Nature-but make sure you give a mental shout-out to the aviation engineers who made that runway possible.

It's easy to overlook the importance of a well-designed runway, but that's typical of most engineering projects. "In general, I think engineers don't like the spotlight," explained Virginia Groeschel, the 2014 Alumni of Distinction Emerging Leader who will be recognized for her dedication to engineers both present and future at this year's Green & Gold Gala.

Virginia has worked statewide since earning her civil engineering degree from UAA and she sees things a little differently. For her, airports aren't just landing strips, they're lifelines. "As an aviation design engineer, we see some communities with no other means of transportation. None, zero," she explained. "Their critical infrastructure includes just that one runway, so you think 'man, I better do a good job.'"

She currently works for the State of Alaska DOT&PF covering aviation projects across their central region, but her career as a civil engineer has spanned highway, water, sewer and environmental projects as well. She's loved them all (yes, even sewer design). "To help improve a community by just doing what you love to do, that's an awesome feeling," she said.

The long road to graduation

Virginia grew up in a Coast Guard family on Kodiak Island, where she developed a knack for problem-solving-a key trait of an engineer-at a young age. "When I was a kid my dad would bring home these little metal puzzles that were all bound up together," she recalled. "No one in the family could figure it out." She quickly learned how to assess and solve problems (and impress her siblings with her puzzle-solving) and that creative outlet is a large reason she loves engineering today.

"You don't have to be an engineer to be able to problem-solve," she explained, "[but] I think engineering graduates are so sought after because ... we are trained to think critically and specifically to solve problems."

"When it comes right down to it, you really are just trying to solve real world problems."

A large source of Virginia's motivation comes from her own student days. Coming from Kodiak, she felt overwhelmed in the big city of Anchorage. Likewise, she was unaware of the university's support network available to students. Finances stacked up and she opted to take a semester off for a temp job, which led to four years as a retail manager for AT&T and a much longer break than intended.

"Everybody has their challenges, and for me I chose to work and try to stabilize my income," she said. Thankfully, she had a network of people looking out for her. "People kept asking 'Are you going to take a class next semester?' she said, "until I realized I had an opportunity to go back to college."

Two weeks after getting married, Virginia returned to UAA determined to finish in three years no matter the challenges. She still juggled multiple jobs at first (even waking up at 2:30 a.m. in the summers to start her workdays) but soon landed a steady internship at Tryck Nyman Hayes Inc. (TNH). The internship provided her first experience in professional engineering and, just as importantly, allowed her to settle on just one job. She reached her goal and finished her degree in three years, even starting UAA's Engineers Without Borders student chapter along the way.

She launched an impressive career after graduation-serving as president of the American Society of Civil Engineers chapters at both the Anchorage and statewide levels-and she's eagerly looking forward to the future. "For me I could do engineering until I'm 100," she added. "I absolutely love this."

After a drawn-out college experience, Virginia now hopes to help the next generation face less hurdles through her work with the UAA College of Engineering Alumni chapter. 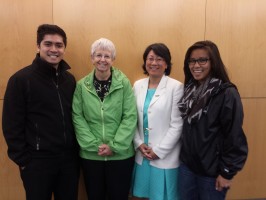 Virginia co-founded the UAA College of Engineering Alumni chapter last year and now oversees the group's ambitious goals as president; it was apparent early on that the engineering chapter had a lot they could accomplish and a lot of engineers they could connect.

At an early chapter meeting, ideas came pouring in. "Someone said 'lets do an outreach program, lets do a STEM program in a school," Virginia explained. "Lets figure out a way to talk to high school students, lets talk to alumni, lets see if they want to mentor some of these students."

In Virginia's eyes, it wasn't just elementary students benefitting from the presentation. Like a true engineer, she sees all sides of the event. "It's another opportunity for UAA students to speak in public," she added. "And it helps the UAA students refine some of their public speaking techniques in a fairly safe environment."

"Mentorship, to me, is a broad range of ideas and we're trying to support the whole spectrum of students," she explained. The chapter hopes to speak with freshmen and sophomores about tutoring support, internships and getting involved in campus groups (the list of student clubs in engineering is impressive). On the other end, they'll connect the dots for juniors and seniors who want to speak with professional engineers or need support finding internships. "It's really providing a channel or a bridge for engineering students to talk to professional engineers in positions that they want to try," she explained. "By sophomore year, if they had an opportunity to talk to someone, maybe it would help them make that decision."

Like most engineers, addressing the crowd at the black-tie Green & Gold Gala is certainly not in Virginia's regular wheelhouse. But, like most opportunities, she sees this as a moment to seize. "I don't like to stand in the spotlight, "she said, "but if I have the opportunity to step up and present my personal mission or goal, I'm just happy to help others. That's it." Knowing what she went through to finish her engineering degree, Virginia is taking the opportunity to recognize the support she received from family, friends and coworkers along the way, and pay that positive energy forward to today's UAA engineering students.

A self-described optimist, Virginia has endless reserves of ideas and energy. "Even when it's raining, I'll look for something positive because there's no point in being negative," she said. Perhaps that outlook aids in her problem-solving skills, and she's now facing a big brand new challenge as president of the young engineering chapter. "We've got the support of the Dean and its matter of connecting the dots, bridging college to professional engineering and getting us all together," she smiled. "That's the hard part. I love the idea of it, but it's not easy."

For such an effective problem solver, it's a brilliant problem to have.